Top manufacturers functioning in the global plant sterol esters market capture the market share between 55-65%. These key players are having strong regional as well as global presence. The key strategy of these players is expansion of R & D to launch new products and obtain certifications from the issuing authority. Majority of their business is export based. Some of the Players that fall in this category are Cargill Incorporated, BASF SE, Archer Daniels Midland Company, Raiso plc.

HSF Biotech, Arboris LLC, and Vitae Caps S.A. Apart from top manufacturers, there are some other companies which have presence in country or region or some regions of the globe. The key strategy of these players is towards expanding their sales and manufacturing network across the country and region. Example of companies which come under this shade areEnzymotec ltd, Blackmores, New Roots, Pharmachem Laboratories, and Anshul Life Sciences, among others.

Toby's, and Procter & Gamble have started manufacturing and promoting their products based on plant sterol esters. This shows a clear impact on the growth of plant sterol production and consumption which is one of the important reasons to lead the plant sterol ester market to grow.

Individuals in the U.S. are shifting focus to the products containing plant sterol esters in order to lower their cholesterol level. Many companies, such as RAISO PLC., BASF SE, and Cargill Incorporated, started the production of plant sterol ester-based products in the late 1990s and have increased their production capacities and facilities in order to meet the growing demand. This in one of the major trend that is driving the growth of the plant sterol market.

As plant sterol esters have been generally recognized as safe (GRAS) by FDA (Food and Drug Association), its  addition in a limited amount in many food applications, such as milk, yoghurt, mayonnaise, vegetable oils, coffee, beverages, butter, chocolates, snacks, etc. in many well-developed and emerging countries, such as Finland, Germany, Turkey, Israel, China, Japan, Taiwan, United Sates, Canada, Brazil, Australia and New Zealand, etc. is expected to contribute towards the growth of the plant sterol esters market across the globe during the forecast period.

The European Union Scientific committee has also allowed the addition of a limited amount of plant sterol esters in food products, which will also contribute to the increase in the consumption of plant sterol esters. FSANZ (Food Standards Australia and New Zealand) has also allowed the use of phytosterols esters in food products, such as vegetable oil, milk, and breakfast cereals. 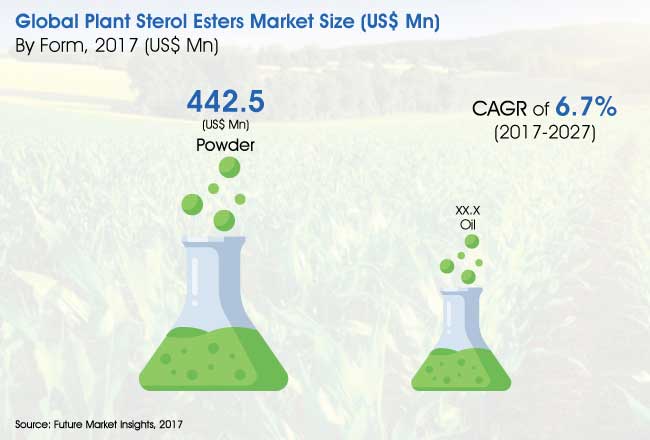 Powder segment by form type to dominate market share, on the other hand the oil segment is expected to lose 220 BPS during the forecast period