Besides booming construction and infrastructure industries, stringent regulatory norms set for lightweight automotive bodypanel and components are identified to be driving the demand for structural adhesives worldwide. Increasing use of structural adhesives in aerospace applications for reduced weight and improved bonding will also remain among the key factors impacting the market performance through 2028.

The global structural adhesives market is anticipated to cross a value worth US$ 16 Bn by the end of the forecast period. During the projection period 2018-2028, the market is pegged to expand at a promising CAGR of 5.3%. 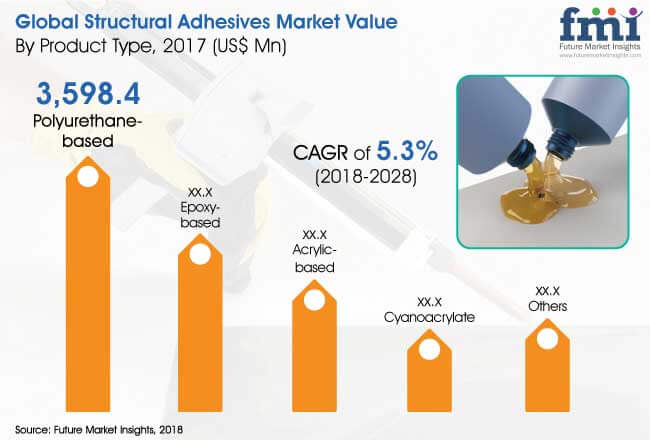 Stiff competition between the key market players in China and North America will enable both the regions to continue their dominance in the global structural adhesives market, in terms of revenue share. European market will also be a key region through 2028, as indicated by the report. While bolstering growth of automotive and construction sectors is expected to drive growth of North America and Europe, the flourishing electronics sector is likely to fuel growth of Chinese market.

China is believed to continue its lead as the top choice among investors. Some of the key players such as Sika AG, Henkel AG & Co. KGaA, Huntsman Corporation, and 3M Company have been concentrating on gaining an expanded value share through higher investment in China.

While China and North America are currently observed to be accounting for significant market value shares in the global structural adhesives market, the report spots developing economies such as MEA, SEAP, and Latin America as the high-potential regional markets, estimated to open new doors of opportunities for manufacturers in upcoming years. MEA has been recognized as a high-growth low-volume region expected to host multiple opportunities during the forecast period.

Soaring demand for lightweight composites among automakers will play a crucial role in expanding volume sales of structural adhesives in next few years. Aerospace industry will also continue to put forth significant demand for lightweight composites, and eventually for structural adhesives. MEA, especially GCC countries, will reportedly register high sales owing to a widening application base in the transportation sector. GCC is likely to be a high-growth regional market within MEA, whereas Africa will witness relatively lower growth.