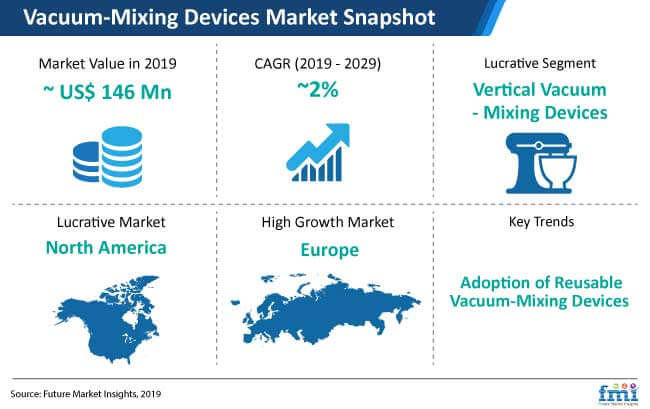 Manufacturers operating in a vertically-integrated chain wield more power. Hence, they can extend their market reach and drive profits. However, there are risks present in such chains, such as procurement power, employee strength, and cash inflows. Hence, adequate analysis is required in order to operate effectively in such a structure.

Vacuum-mixing device manufacturers present in a vertical supply chain are providing portable products for bone cement mixing, which is primarily used in orthopedic applications. The cost adjustment is very well in control by the manufacturers in terms of investment and return.

Clinical benefits associated with the use vacuum-mixing devices

Vacuum-mixing devices help improve the mechanical properties of bone cement. As per clinical research, vacuum mixing reduces monomer evaporation and exposure in the operating room. Monomer exposure from the mixing of cement releases toxic and organic solvents that are critical, in in contact.

Companies involved in the vacuum-mixing devices market should take this product difference to manipulate their business strategy in order to increase their consumer pool. Clinical difference that omit such harmful conditions play a significant role in the expansion for their product line in terms of sales.

The vacuum-mixing devices market is a highly fragmented market. The top players contribute a significant share to the market due to their presence in most of the developed and developing economies, as well as the premium cost of the products offered by them and the comparably high adoption rate. The vacuum-mixing devices market consists of several small- to medium-sized companies that compete with each other, and only a few large enterprises.

It is not a direct restraint for the market, but surely limits the market expansion as there is no single company influencing the industry to a particular direction. Companies need to find the approach suiting their capability in order to significantly grow their businesses in this market.

The market growth for vacuum-mixing devices is comparatively low as compared to 10 years ago. The year-on-year sales differ in each company, a tier 1 company is experiencing a worse growth rate as compared to a tier 3 player. The return on investment for smaller companies is adjusted with time, but it surely affects the structure for that period, and things are still better for financially strong companies.

The vacuum-mixing devices market value gets affected because of the drop in volume, though it is analysed through KOLs that the pricing for each product is not significantly decreasing but staying at a same level with minimal difference.

Key opinion leaders from respective vacuum-mixing devices companies are in favor of introducing new feature such as automation, digital feeding, and scanners to their product offerings. Then there are inorganic business strategies present to increase the vacuum-mixing devices market share for each company, such as arranging strategic collaborations with key players in the industry, sales channels, creating customer centric business models, and affordable pricing for maximum reach. 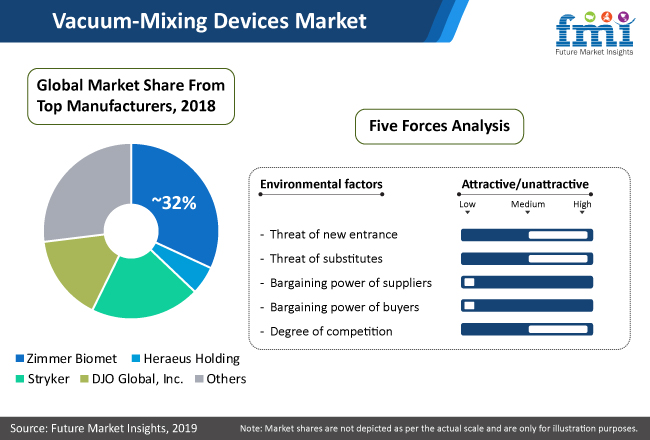 Apart from the positive contribution of vacuum mixing devices toward the mechanical properties of bone cement, their role in fine-tuning other aspects such as cement homogeneity and quality have also gained prominence over the years.

Until the 1980s, preparation of bone cement was carried out as per the standards introduced by the English Surgeon John Charnley, who pioneered the use of bone cement in Orthopedics. Post 1908s, special focus was directed toward investigation of viable techniques that would help enhance cement strength.

Though closed mixing under ‘vacuum’ conditions was initially aimed at environmental reasons, its benefits in terms of reinvigorating mechanical properties of bone cement, improving the cementing techniques, and securing the operating room environments became highly evident. Such particulars are likely to add new certainties to the near-term outlook of vacuum mixing devices market.

Porosity in bone cement remains of the key challenges eroding the mechanical strength and fatigue life of the bone cement. Bone cement, to successfully survive in vivo, must be capable of withstanding loads of varying intensities it endures.

The fatigue property of bone cement, which is directly proportional to porosity, remains a key determinant of the long-term survival of joint replacements such as hio and knee replacements. Thus, effective reduction of bone cement porosity helps in boosting its fatigue strength, and this, in turn, is effectively met by the process of vacuum mixing.

Fatigue failure in case of bone cement is a common resultant of defects in the cement mantle. Presence of big-sized voids in the bone cement cause rapid propagation of fracture, which can be a possible scenario both in vivo as well as vitro.

Vacuum mixing devices play a vital role in enhancing the mechanical life properties of bone cement, largely as a consequence of their abilities to reduce micro- and macro-pores. This, in turn, staves off the chances of bone cement porosity and nourishes its fatigue strength, thereby boosting the final outcomes of orthopedic procedures.

The North America healthcare sector spectated significant shifts over the past few years, as the regional healthcare systems have jumped onto the ‘value-based’ bandwagon. In alignment with the aforementioned trend, value-based care has become one among the top priorities of the orthopedic professionals in North America.

One of the key principles of these new healthcare models is ensuring efficiency and care, wherein the healthcare professionals focus on standardization around ‘clinically-proven’ practices and care pathways that would not only redefine care but also bring down outcome disparities. Vacuum mixing is carving its place as a process holding utmost importance in orthopedic procedures, which is providing the much-needed impetus to the region’s lucrativeness for vacuum mixing device suppliers to invest in.

Manufacturers in the vacuum mixing devices are focusing on increased production of portable formats, sensing the switch from ‘bench-top’ to ‘portable’. Competitive pricing remains a focal point for manufacturers to beat their rivalry, and accordingly they are paying particular attention to exhaustive sessions of price benchmarking. The market players are also endeavoring launch of reusable vacuum mixing devices to successfully lift up their profit pools.

In addition, market players are also shifting their focus toward development of vacuum mixing devices offering high computability with samples of varying viscosities. This move will not only have a profound contribution to the relevance of their portfolios but will also give these players an edge over their potential competitors.

Market penetration through various sales channels will also remain a prominent strategy, wherein manufacturers will resort to ‘influential marketing’ to turn consumer decisions to their favor. Large-scale promotion of their products through press conferences and advertising campaigns will also be prioritized by the market players to sustain revenue growth.

Meeting the Challenges of Regulations

The vacuum mixing devices market remains a ‘regulation-driven’ landscape, wherein multiple regulations have been put in place for manufacturers to take into utmost consideration. Regulations make it harder for newer models of vacuum mixing devices to make their way onto the market shelves in lesser time, thereby increasing the ‘time-to-market’ factor for those pipe-lined devices.

Regulations also have a substantial impact on other crucial factors, with some of them being licensing, franchising, pricing and standard settings. Varying sets of regulations across different regions pose hurdles for the market players with respect to business expansion, making it no less than a restraining factor to cope with.

Over The Counter Pain Medication Market