There is an increasing tendency of women who have observed chronic vulvar pain once in a lifetime. If the pain is persistent for more than three months and has no apparent cause, it is called vulvodynia. It is estimated that 16% of women in the U.S. will have Vulvodynia at some point in their lives. According to the National Center for Biotechnology Information, U.S. National Library of Medicine, 17.9% of women reported symptoms suggestive of past Vulvodynia in 2013.

Based on an analysis, 101,007 women in the 4-county area are estimated to have vulvar pain consistent with Vulvodynia, with another 218,219 having a history of such pain that has since resolved. As a result of these factors, the demand for the drugs is constantly rising. The drug type and its use is measured by the level of pain that is caused of vulvodynia. Although it is a chronic disease, at times even the minutest of pain can cause depression and anxiety among women.

Anticonvulsant to be the most used drug

It contains tablets taken by mouth and works well for pain related to the nerve. The tablets are prescribed for a number of conditions impacting the central nervous system and they influence pain at the level of the spinal cord. Pregabalin is another anticonvulsant drug. It is very similar to gabapentin; however, it is reported to have fewer side effects and is possibly more operative. 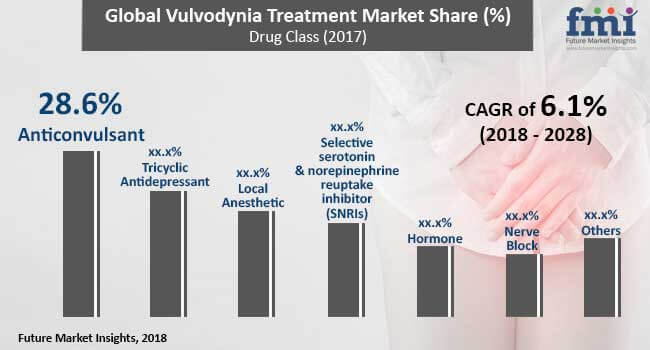 Tricyclic antidepressant to rise in consumption

Tricyclic antidepressants (TCAs) are a class of medications that are used primarily as antidepressants. These can be prescribed by your doctor in doses lower than those used to treat depression. The drugs are used because they alter the way in which the nerve fibres transmit the sensation of pain, not because the doctor thinks it's all in your mind.

It is often necessary to continue with treatment for 3-6 months. Examples of tablets include amitriptyline, nortriptyline and dothiepin. Other antidepressants namely venlafaxine can also be tried. As the treatment of vulvodynia is mainly centred at placebo, antidepressants are the first of form of medical treatments given to a patient in case of minor pains.

Use of local anaesthetic to rise globally

Local anaesthetics are generally applied externally to the skin. This medication originates in a form of gel or cream. They may be used before sexual intercourse to provide short-term pain relief, or they can be used for extended periods. Local anaesthetic is used topically to introitus, which decrease hypersensitivity. This medication need to apply before intercourse or nightly on a cotton ball in the introitus. Lidocaine gel or cream is considered to be the best local anaesthetic cream or gel for vulvodynia.

The vulvodynia treatment market has been segmented on the following: