Wireless Microphone Market: Will the Availability of Low-Cost Substitutes Challenge the Performance of the Market in SEA: Global Industry Analysis (2013 - 2017) & Opportunity Assessment (2018 - 2028)

Manufacturers of wireless microphones would do well to focus on expanding their business across countries in the APAC and North America where there is increasing demand for innovative wireless microphones that are used in various applications such as public speaking, interviews, corporate conferences, house of worship, and concerts.

The exponential use of wireless microphones in concerts, musical events, sports events, and broadcasting studios across the globe along with a growing adoption in educational institutes is primarily responsible for a significant increase in the revenue share of the global wireless microphone market.

Adoption of wireless microphones to increase exponentially in North America 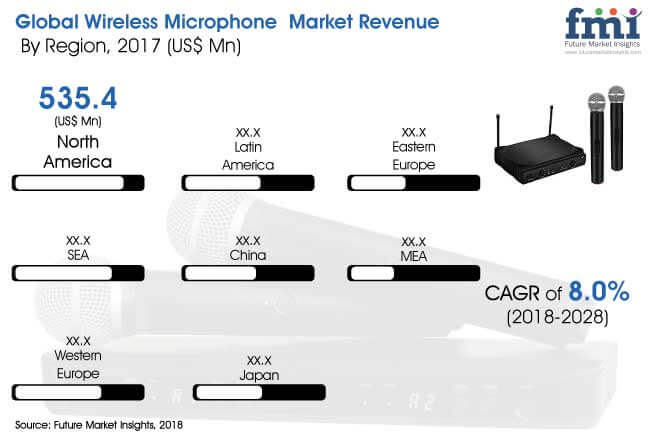 The growth in IoT and M2M communication in India and ASEAN countries has created immense opportunity for the wireless microphone market in SEA. Also, governmental initiatives towards the development of wireless technology is also supporting the growth of the market in the region. In Asia Pacific, wireless microphone manufacturers are focused on investing in R&D activities to develop advanced and cost-effective products in order to gain a competitive advantage in the market.

Manufacturers of wireless microphones in Europe have been focusing on building a fast and more effective sales and distribution network for their products across key local markets. As a part of meeting their objectives, manufacturers are using online sales channels to help customers buy various types of microphones. Furthermore, they are also providing price incentives for online purchases, and have been stationing their direct business development representatives and agents in various cities to ensure quick product delivery.

The launch of corporate e-learning programmes, which are designed for skill development and to train employees, is driving the demand for wireless microphones in the global market. The implementation of IT-enabled training rooms coupled with a boost in the employment rate in some of the major European countries is expected to contribute to the revenue growth of the global wireless microphone market during the forecast period.