[200 pages Report] The global amines market is projected to witness significant growth during the assessment period, starting from 2021 to 2031. Amines play a crucial role in several end use sectors including methylene diphenyl isocyanate (MDI) & polyurethane, pharmaceuticals, plastic, polymer and rubber, agrochemicals, paints and coatings, cosmetics and industrial cleaners and others. The market is expected to gain impetus in response to the surging production of asphalt-additives and agrochemicals.

In its new study, ESOMAR-certified market research and consulting firm Future Market Insights (FMI) offers insights about key factors driving demand for Amines. The report tracks the global sales of Amines in 20+ high-growth markets, along with analyzing the impact COVID-19 has had on the rubber, plastics, automotive and construction in general, and Amines in particular.

How Does Historical and Future Outlook of Amines Market Compare?

Amines consumption is projected to grow by 2X during the forecast period, especially on account of the expansion of end-use industries. East Asia and Europe are expected to continue their dominance in the market. Expansion registered in these regions is driven by increasing investments by regional governments in industrial development.

Leading manufacturers are expanding their production capacities to cater to the rising demand. Some of them are strategically collaborating with end users especially pharmaceutical companies to ensure long-term supply. According to FMI’s analysis, amines sales have grown at 5.5% CAGR between 2016 and 2020.

Amines are used as solvents, intermediates, catalysts, emulsifiers, stabilizer, and scrubbing agent in various industries such as, manufacturing of polyurethane, pharmaceuticals, agrochemicals, polymers and other chemicals. The ongoing crisis of COVID-19 pandemic has significantly impacted the global economy and industrial sector due to the disruption in the supply chain and reduced demand from the consumers.

The same remains true for the amines market. Reduced demand from end-use industries such as MDI, plastic, polymer and rubber and others, has impacted the growth rate of the market in 2020. However the pharmaceuticals sector provided continued growth as it was mostly exempted from stringent lock-down scenarios.

Given the initiatives taken by the regional governments to revive the economic growth and to improve the performance of the industrial sector, global amines market is anticipated to register desirable growth rate from the year 2021.

What is the Commercial Potential of Amines?

The rising polyurethane application will therefore create lucrative opportunities for the market during the assessment period. However, the MDI segment also reported dip in growth amid 2020, causing overall amine sales to reduce. However, recovery is on card 2021 onwards, as per FMI.

The growing awareness regarding the harm caused by hazardous chemical substances to human and environment are compelling governments and authorities to implement stringent regulations, curbing the production, use, and transportation of several types of chemicals which are considered toxic in nature.

For example, the U.S. Food and Drug Administration (US FDA) has set certain standards regarding the use of amines in food and packaging industries. The agency has set limits for the controlled release of amines through systems that come in direct contact with food and pharmaceutical packaging.

It also has set limits on the permissible concentration of cyclohexylamine and octadecylamine (ODA) that can have contact with milk products. Thus, a system with 3 ppm of ODA or 10 ppm of cyclohexylamine can meet the standards, beyond which the seller can face regulatory action.

In Europe, amine types that are included in REACH regulation should not be detectable in analytical equipment, concerning the excluded amines, their sum should not exceed 0.01 mg/kg if food and food stimulant. This is to be ensured by the manufacturers and importers that are certified by REACH regulatory body.

Furthermore, a certain subset of azo dyes are classified into carcinogen categories, these amines has been restricted to a limit of 30mg/kg in dyed leather and textiles, which can come into contact with wearer’s skin and can cause cancer. Thus a few categories of amines are highly regulated by various regional and national agencies which can impact their market growth in case of compliance issues.

The demand for treated water is on the rise with rising population. This is proving to be a significant factor driving the market for amines, which continue to be used in large amounts for water treatment. The impact of various industries on water usage, in a macro view, has blatantly unveiled the rising issue that water discharged from industrial processes directly affects natural water resources.

Pollutants ranging from heavy metals to organic matter have made countries cautious about harmful effects water pollution. This has resulted in high investment in reducing the environmental and human impact of discharged water. Amines are effective and act as biocides that kill microbes in the water. Thus, the growing awareness regarding the usage of treated water worldwide is expected to spur the demand for amines in upcoming future.

Why is China Considered Leading Market for Amines?

China is expected to remain the dominant market for amines. This is due to the significant growth in the industrial sector that China has observed over the past few years and the trend is estimated to remain same over the forecast period. Presence of some of the leading manufacturers of MDI in the country will create lucrative growth opportunities.

What Are The Factors Are Amines Sales in U.S.?

The U.S. is one of the leading producers and consumers of amines especially aromatic amines. Increasing automotive demand, which is driving polyurethane sales has been positively impacting the amines market. Technological advancements and ongoing research and development activities in pharmaceuticals is further expected to drive the amines demand in the country. The U.S. also is one of the leading producers of agrochemicals, which has placed it as an important for amine producers.

Which is the Leading End User of Amines in Germany?

Germany is one of the major producer of polyurethane. Growth of amines in the country is attributed to the consumption of polyurethane. MDI and polyurethane are expected to remain dominant end-use segment for the amines market in Germany backed by presence of flourishing market for automotive, packaging, furniture, insulation products and others.

According to the Germany Trade and Invest, the German plastic industry accounts for sales of nearly EUR 91 billion each year. The increasing demand for plastic is expected to support the expansion of amines market in the country.

What Drives Amines Market in India?

India’s amines market is dependent on the demand from pharmaceuticals industry, accounting for more than half of the demand, which is quite a contrast compared to the global scenario. Moreover, at a global level, MDI production accounts for a significant share of amines demand, which is not the case in India.

Alkyl amines and Balaji amines are the major manufacturers of amines in the country. The pharmaceutical industry in the country, which was earlier dependent on. China, now prefers Indian suppliers due to the supply constrain caused by import restriction in India. Moreover, some countries are looking at India for import of Amines which generally imports from China.

What is Driving Amine Sales in Brazil?

The amines market in Brazil is expected to grow at a moderate rate due to presence of some of the key market participants. Besides this, rising demand from the end-use industries including the pharmaceuticals, MDI & polyurethane, and agrochemicals industries will keep the demand for amines high.

Which is the more preferred amine type? 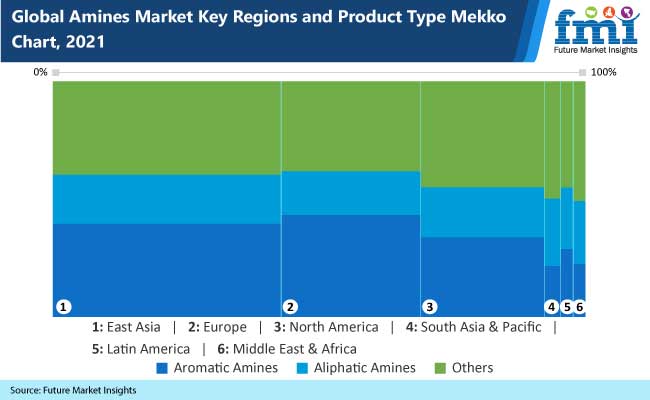 How Will Demand from Paints and Coatings Shape Amines Market Growth?

Regions such as, Africa, South America and the Middle East are expected to see a positive growth in the construction industries, where the demand of paints and coatings is going to benefit the market of Amines. Paints and coatings also are used in the automobile industry, which has recorded excellent growth numbers in the past few years and it is further expected to remain the same growth trend in the coming years. This growth trend can boost the global amines market.

Introduction of new and innovative products, solutions and technologies for end use industries, is the key strategy adopted by market players.  Besides this, some of the leading companies are planning to expansion of their production capacities. For instance, in 2019, BASF SE invested in a second tert-Butylamine plant in Nanjing, China.

It is however interesting to note that some of the leading players are planning on increasing the cost of their products. For instance, in 2017, Evonik Industries AG increased the price of fatty amines, derivatives.

FMI follows a methodology that encompasses demand side assessment of the market, and triangulates the same through supply side analysis. This methodology is based on use of standard market structure, methods and definitions. Request detailed methodology

FMI provides a secure online payment system to buy report seamlessly. You can buy the report securely and safely.

Which is the most lucrative market for amines?

East Asia to remain the dominant market for amines. Within the East Asia market, China is expected to hold the maximum share.

Which is the top-selling type of amines?

Aromatic amines is expected to remain dominant product type due to their application in the production of MDI and polyurethane.

Which end-use industry is exhibiting high demand for amines?

Amines are used in several end-use industries. Of these, MDI is expected to remain dominant due to their use in the production of polyurethane.

Which are some of the leading companies providing amines?

Some of the prominent manufacturers of amines are BASF SE, Huntsman International LLC, Covestro AG, Yantai Wanhua and many others.