An Incisive, In-depth Analysis on the Automotive Window Regulator Market 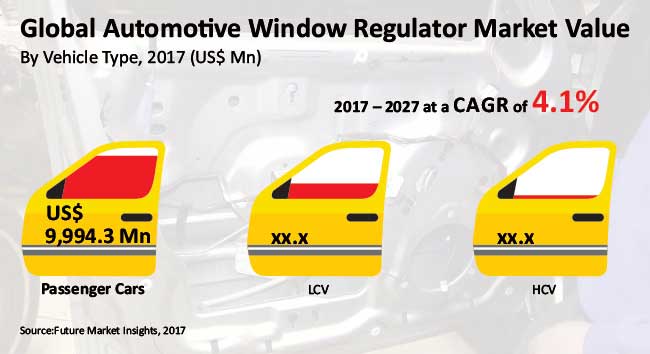 Factors such as increasing purchasing power of people, advancements in infrastructure and improved consumer sentiments are together driving the demand for vehicles, which in turn increases the demand for automotive window regulators. The automotive industry contributes a healthy percentage of the world’s GDP. More number of OEMs are setting up their manufacturing units across the world. India and China are the prominent markets for car manufacturers owing to increasing population and growing need for personal vehicles. Moreover, many banks and financial institutes are coming up with different loan schemes, making it relatively easy to own a car.

Manufacturers are focussing on producing electric or automated window regulators, owing to the better functionality and efficiency. Furthermore, Corporate Average Fuel Economy and Environmental Protection Agency standards have become relatively stringent and levy heavy fines on automakers who do not reach the standard mpg norms. The aforementioned factors force automakers to develop better automobiles with superior fuel efficiency and reduced emissions. Usage of better alloys with high tensile strength in automotive components is estimated to support the growth of the global automotive window regulator market.

In many countries, governments have banned the import of used cars and increased the tariffs depending on the age of vehicles. For instance, the Poland government progressively increased vehicle tariffs according to the age of the vehicles. The average age of cars in Russia is 10 years, so consumer demand for new cars is comparatively high. The car density in Russia is around 180 and in Poland is around 328. The increase in demand for new vehicles is driving global demand in the automotive window regulator market.

Regional analysis of the Passenger Cars segment – a growth of 1.3X in terms of volume likely to be witnessed in the Western Europe automotive window regulator market

A glimpse into some of our key observations

We have adopted a systematic research approach while inspecting this market. In-depth secondary research is used to ascertain overall market size, top industry players, top products and industry associations. Our analysts have also conducted extensive interviews with industry experts, players, distributors and retailers. We have validated data using the triangulation method, in which secondary, primary and Future Market Insights’ analysis contribute to the final data. In the compilation of the report, the forecasts are conducted in terms of CAGR, while other important criteria such as year-on-year growth and absolute dollar opportunity have also been incorporated presenting the client with deeper market insights and future opportunities likely to emerge in the global automotive window regulator market.