The report covers comprehensive information on the market trends, value (US$ Mn) and volume (units), competition projections, recent developments and dynamics in the global rivet gun market for the duration between 2018 and 2028.

The global rivet gun market is estimated to reach US$ 799.9 Mn by the end of forecast period, registering a CAGR of 6.1% in terms of value. The rising demand for pneumatic rivet guns and the increasing online sales of rivet guns are some of the key factors expected to boost the demand for rivet guns in the global market.

Urbanization has been creating a need for additional infrastructure development, such as transportation, energy and related maintenance services; all of which require rivet processing tools. According to the UN, the world population is expected to increase by 20% between 2015 and 2025, with Asia and Africa projected to contribute significantly to this growth, which is expected to further lead to urbanization and the subsequent need for hand and power tools.

Investment in the housing sector is a major factor fueling the demand for rivet guns and rivet processing tools as rivets are widely used in residential construction for the attachment of doors through hinges, as well as roofing and ceiling. Growth in aerospace, automotive and marine fasteners is also expected to drive demand for rivet guns in the global market.

The sales of rivet guns in India has been growing with rapid infrastructural development and urbanization, and strong investment in the construction housing sector. Sales in Japan grew with the gradual recovery of investments in the housing sector and the demand for restoration following the Great East Japan Earthquake.

By the end of the forecast period, the application of rivet guns in the building and construction industry is anticipated to grow 1.71X in terms of value, as compared to 2018. The segment is projected to create an incremental dollar opportunity worth nearly US$ 46.2 Mn during the forecast period.

As per IMF data, the global economy grew by 3.8% (real GDP) in 2017. Economic growth improves the standard of living, alongside the spending power of people. The automotive industry across the globe has been enjoying a period of relatively strong and substantial growth and profits, which consequently has been surging the demand for rivet processing tools (rivet guns).

The pneumatic rivet gun segment is projected to grow with a 5.6% CAGR, in terms of value, over the forecast period. The rising demand for lightweight processing tools and automotive fasteners in the automotive industry for ease of use, high performance and energy efficiency are some of the other factor driving the growth of the rivet gun market.

Growth of Semiconductor and Electronics Industries

The rising demand for consumer electronics with added functionality, long operating times and superior performance has been prompting electronics manufacturers to focus on developing quicker ways to provide products to end users. Rivet processing tools such as rivet guns play a significant role in meeting these objectives.

Accurate and stable processing tools enable close control of the microenvironments surrounding electronics and semiconductor tools. In the past few years, the electronic industry has grown at a substantial rate in emerging countries, thereby providing impetus to the growth of the rivet gun market.

E-business or online sales in emerging economies have also been growing at a significant pace in recent years. The online sales of rivet guns around the globe is projected to grow with a 6.9% CAGR in terms of value over the forecast period. 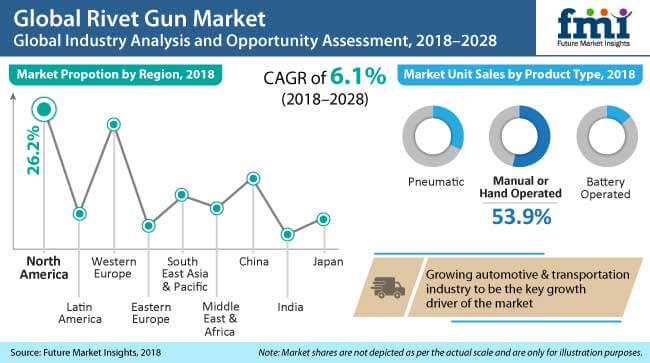 Production and consumption of rivet guns in China and India are expected to grow with a significant rate during the forecast period, owing to the positive outlook of automotive and construction industries in India and China. Rapid urbanization has been fueling automotive sales, which in turn has been surging the demand for rivet processing tools (rivet guns).

Rivet guns are extensively used in the automobile industry to join or assemble parts. In the construction industry, rivets are used to assemble two steel frames, construction towers, light towers and bridges, steel roofing and trusses. Collectively, in terms of value, China and India are expected to grow 2.05X over the forecast period.

The well-established production and distribution facilities in India and China, coupled with the growth of the online sales channel, are expected to create a significant opportunity for the growth of the rivet gun market in the Asia Pacific region.

In the past few years, the rivet gun market has witnessed significant developments from a competition perspective. Acquisitions, collaborations and expansion of production capacity are some of the key strategies adopted by market players to expand and sustain in the global rivet gun market.

On the basis of product type, the global Rivet Gun market has been segmented into:

On the basis of capacity, the global Rivet Gun market has been segmented into:

On the basis of operation type, the global Rivet Gun market has been segmented into:

On the basis of distribution channel, the global Rivet Gun market has been segmented into:

On the basis of end use, the global Rivet Gun market has been segmented into:

On the basis of region, the global Rivet Gun market has been segmented into: