The animal model market had been facing tremendous pressure from animal welfare organisations and activists in various countries before the outbreak of the Covid-19 pandemic. Animal rights groups had managed to raise concerns over welfare of animals being tested for as part of pathological and biological research among the general public, which in turn had translated into these organisations forming effective pressure groups. These pressure groups dominated the discourse in formation of new legislation that could potentially pose hurdles to animal model tests. However, the situation has changed drastically since the outbreak of Covid-19.

This change in situation is since animal model testing was, and remains, central in research towards developing an effective vaccine against the Covid-19 virus. This has caused pressure groups to tone down their rhetoric and also reduced their penetration potential into public discourse over the issue.

More importantly, it is notable that the said pressure groups were most effective in developed countries such as those in Western Europe and North America. Given that these regions are vaccine manufacturing hubs and home to some of the largest vaccine manufacturers, the weakening of these pressure groups in these regions is estimated to pave the way for rapid growth in the animal model market over the next ten years.

Several of these companies have also enjoyed major government funding, while some others have clocked record profits following development and distribution of their Covid-19 vaccine. As a result, going forward it is expected that these factors will lead to a manifold expansion in research into other diseases and health conditions, which will translate into rapid growth for the animal model market.

Animals on whom pathological and biological studies are performed and tested are referred to as animal models. Animal models are utilized on the back of their functional resemblance to human bodies. Various guidelines have been offered that have to be followed when animal models are used for experiments.

Essential requirement for animal research for achieving progress in healthcare and medical science is well proven, which in turn has gained support from researchers. Rapid advancements in novel technologies have made animal models easy and constructive. Significant incidence rate of diseases, along with adverse effects of drugs have driven the adoption of animal models for ensuring the safety of humans. In addition, increasing government intervention in research institutes for the development of standard protocols associated with animal models will fuel expansion of the market. 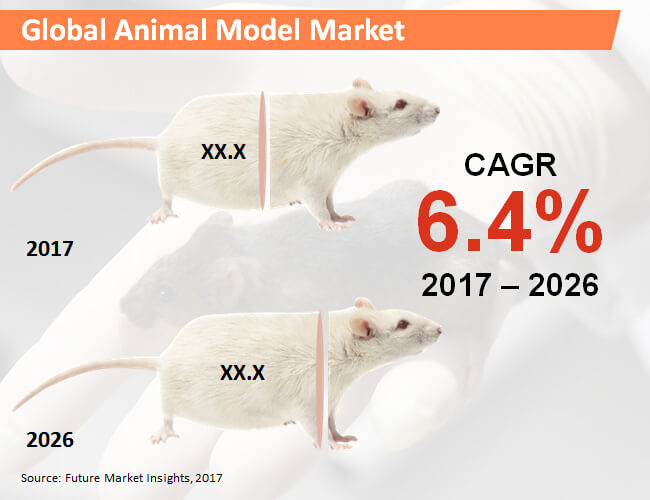 Although animal models have been deemed less effective for human disease research, where only 5% of drugs derived are suitable for humans, the market for animal models is huge. Majority of animals used as models are bred for research purposes, albeit they are obtained from various other sources. For instance, surplus dogs from Austria used in the greyhound racing industry are being used in research labs. However there is a rising concern for animal welfare, which in turn has compelled research organizations to seek measures for reducing number of vertebrate animals in research. Additionally, there is surging requirement for organizations and researchers to encourage open engagement with policy makers and the public regarding promotion of animal research’s value and discussion about animal welfare issues.

Global animal models market has been estimated by Future Market Insights’ new report to exhibit an impressive expansion over the forecast period (2017-2026). Revenues from the market are estimated to exceed US$ 2,000 Mn by 2026-end.

North America to Remain Most Lucrative Market for Animal Model