The market for passenger cars is expected to show good growth during the forecast period. The passenger car vehicle type segment in the global brake components market is estimated to account for more than 70% value share in 2017 and is expected to gain more than 200 basis points to reach approximately 74% value share by 2027. This gain can be attributed to an increase in the production and sales of passenger vehicles in developing countries and increasing vehicle parc across the world.

The passenger car segment is projected to increase at Y-o-Y growth rates ranging from 3.7% to 4.7% during the forecast period. This segment is expected to exhibit a CAGR of 4.4% over the forecast period. The passenger car segment was valued at more than US$ 40 Bn in 2016 and is expected to represent incremental $ opportunity of more than US$ 25 Bn between 2016 and 2027. This segment is slated to be valued at around US$ 68 Bn by 2027.

The automotive brake system & components market is contributing to the growth in sales of luxury and high-end cars, both in the OEM & aftermarket channels. High speed and raw power define high performance of these cars, which is why these cars require a robust safety system. The most crucial element of their safety system is the braking system.

With growing sales of SUVs, luxury and sports models, customers not only look for performance but want their vehicles to be equipped with advanced technologies so as to ensure the safety of occupants while driving. This increasing demand for safety systems in luxury cars is driving the growth of the passenger car segment in the global automotive brake system & components market.

Governments across geographies have made numerous efforts to divert the attention of vehicle owners towards vehicle safety, either through imposing regulations or through publicity and promotion. Such activities across the globe are expected to turn customer focus towards equipping vehicles with robust safety systems and updating them during the operational life of the vehicle. This in turn will not only boost the sales of brake systems and related components but also drive the passenger car segment growth.

The significant use of passenger cars is also boosting the global automotive brake system & components market. With consumers’ interest in passenger cars equipped with novel safety technologies, government schemes and regulations boosting deployment of advanced technologies in commercial vehicles and the integration of electronics is expected to significantly drive market growth over the forecast period. 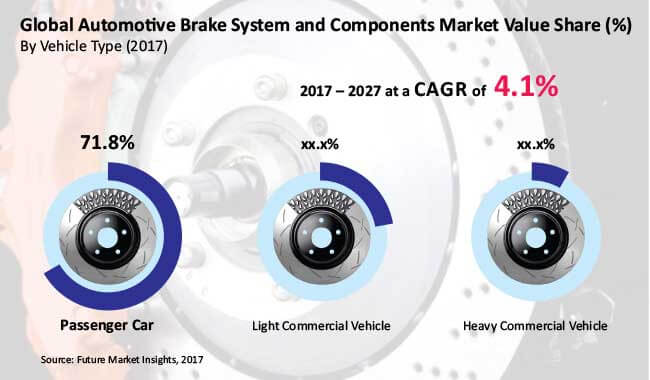