Swift Growth of Automotive Wires for the HVAC Application Segment

The Heating ventilation & air-conditioning (HVAC) segment is projected to grow at a significant rate of 7.3%, in terms of value, during the forecast period in the automotive wires market. This high growth rate is due to increasing penetration of HVAC systems in passenger and commercial vehicles. The HVAC segment is estimated to create incremental opportunity worth US$ 1 Bn between 2017 and 2027. 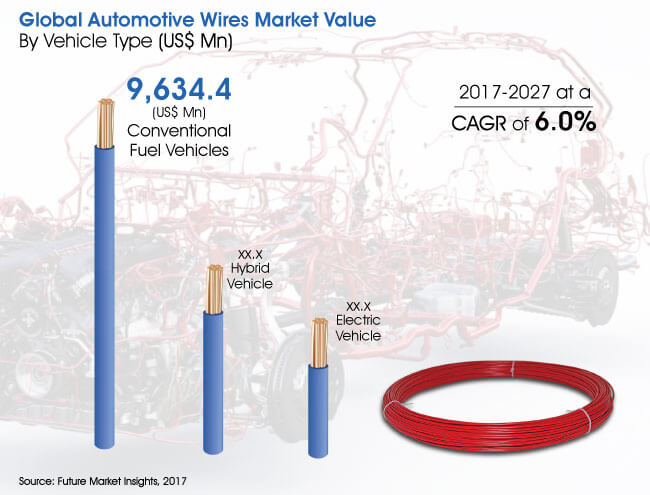 The Asia Pacific (excluding Japan) region is the most prominent market for automotive wires. The Asia Pacific region held more than 40% share in global vehicle production in 2017. Increasing demand from the automotive industry is expected to fuel the growth of automotive wires within the region. Increase in population and increased disposable income of consumers will move the consumers in favour of premium, mid-size and sports utility vehicles, which in turn, will lead to increased vehicle production and further increase the usage and adoption of automotive wires.

The automotive wires market in APEJ region is estimated to grow at a significant CAGR of 6.8% and will represent a total incremental opportunity of US$ 4.8 Bn, in terms of value, during the forecast period.

The manufacturers in the automotive wires market are looking to expand through strategic interventions, including collaborations, acquisitions, expanding production capacity and launching advanced products in the automotive wires market. In 2017, Leoni AG announced its plan to open a new production facility in Nis, Serbia. The facility will produce wires and harnessing solutions for one of its premier client “BMW”. Also, in 2017, Leoni expanded its manufacturing facility in Pune, India. The company inaugurated its novel electron beam accelerator process, which facilitates the production of high-performance wires & cables.

In 2017, Yazaki Corporation established its new wholly owned subsidiary called Yazaki Serbia Doo in Serbia. The new company is dedicated to providing automotive wire solutions in the region. In March 2017, Samvardhana Motherson Group acquired the PKC Group. The PKC group is one of the market leaders in wire solutions for automotive segment.

In 2016, Essex Magnet Wire, a division of Superior Essex Inc. and Furukawa Electric Co., Ltd. (“Furukawa Electric”) announced its interest to form a joint venture to supply a new type of winding high-voltage wire (HVW), primarily to the automotive industry.

The report also provides answers to other important questions related to automotive wires market, such as -

On the basis of material type, the Automotive Wires market can be segmented into:

On the Basis of vehicle type, the Automotive Wires market can be segmented into:

On the Basis of application, the Automotive Wires market can be segmented into:

On the Basis of Region, the Automotive Wires market can be segmented into: