The market is likely to grow at a CAGR of 4.8% CAGR through 2032 with a projection value of USD 6.7 billion. In 2021, the APEJ region held the largest market share for the chickpea flour market. By 2032, this region will hold a market of USD 3 billion. The US chickpea flour market is estimated at around USD 1.1 bn in 2021. Chickpea flour has recently gained popularity as gluten-free flour.

Chickpea flour is produced by grinding whole and dried chickpeas. Chickpeas predominantly grow in tropical and sub-tropical regions. Chickpea flour is prominently utilized in Indian cuisine while for cooking and baking.  Chickpea is a staple ingredient in Southern Europe and South Asia. It comes in the pulses category and is known for being a cholesterol-free source of protein and fiber.

Chickpea flour is also a rich source of vitamins and minerals, and significantly boosts the intake of manganese and folate. Desi form of chickpea flour dominates the chickpea flour market currently and is estimated to hold USD 4.1 billion market share by 2032.

Increasing consumption of chickpea can be attributed to its high nutritional value among existing plant protein sources. Owing to the healthy balance of amino acids, relatively low levels of anti-nutritional factors, high levels of complex carbohydrates, and bioavailability of proteins, chickpea flour has emerged as a functional ingredient for the food processing industry. Chickpea flour also aids in curing various health problems like diabetes and cancer, coronary heart disease, obesity, and is highly popular in home remedies.

India Continues To Be Central To Global Demand For Chickpea Flour 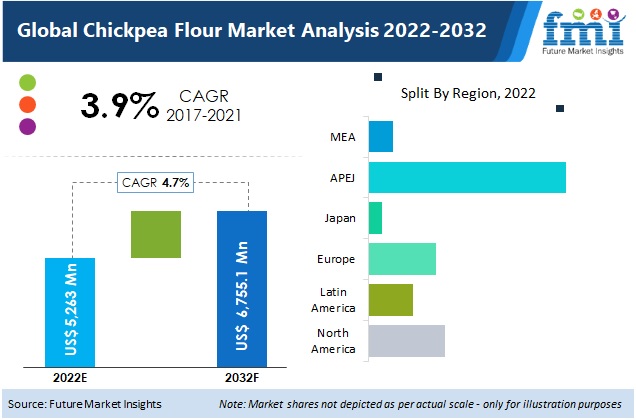 Bakery And Confectionary Continue To Account For Bulk Of Demand

On the basis of product type, demand for desi chickpea flour has traditionally remained higher than Kabuli flour. Desi seeds are smaller and more rounded than Kabuli. Desi chickpeas are known for growing even in poor soils and harsh conditions while Kabulis are high yield, nutty, have a firm texture, and mainly grow around the Mediterranean. The status quo is likely to remain unchanged during the forecast period, with desi chickpea flour likely to account for a higher revenue share of the market.

How much is the chickpea flour market currently worth?

Currently chickpea flour market is worth more than USD 4.15 Bn.

Chickpea flour consumption is expected to grow at a CAGR of around 4.8% during the period 2022-2032.

What are the key trends boosting Chickpea flour sales?

Nutritional, gluten-free, and allergen-free characteristics of chickpea flour, increasing demand for chickpea flour-based food and beverages, rising health awareness among masses, and organic becoming the new trend are the latest trends being observed in the market which is driving the chickpea flour market.

Which are the major countries driving demand for chickpea flour?

India, The US, Germany, France, and China are the major countries driving demand for chickpea flour.

Who are the major players in Chickpea flour Market?

What outlook does APEJ provide?

APEJ holds around 42% of the total chickpea flour revenue share.

At what rate will the U.S. chickpea flour market grow?

US chickpea flour market is projected to grow at a CAGR of around 4.9% over the next ten years.

At what level does the report reflect pricing analysis?

The report presents a detailed cost analysis of chickpea flour based on product type i.e. desi and kabuli.