Chickpea protein is derived from chickpeas, which are a part of the legume seed family. Chickpeas have a healthy nutritional composition, with protein content ranging from 16% to 24%, while also comprising other essential nutrients such as starch, deity fiber, iron, and calcium. Protein procured from chickpeas has various health benefits, making it ideal for consumption in food processing applications. Moreover, as consumers seek alternatives to animal-based food ingredients, chickpea protein is serving as a fitting substitute.

On this premise, it is expected that chickpea protein will gradually replace egg protein, dairy protein, and meat protein. Besides, chickpea protein is free of gluten and has no properties of an allergen, which tends to create adverse immune responses or allergies in consumers. Free of allergens, chickpea protein finds wide-scale adoption in the production of food products, which is expected to remain a major application. Furthermore, chickpea protein acts as an emulsifier that blends water and fat, aiding in the formation of a stable viscous mass substance. On the back of these factors, they are also used as a raw material in hot or cold applications.

According to the 2003–2010 dataset of the National Health and Nutrition Examination Survey (NHANES), people who consumed chickpea/hummus are 53% less likely to be obese and 51% less likely to have an elevated glucose level. This is likely to give a significant boost to consumption. Along similar lines, chickpea protein is known for its role in blood sugar regulation, especially among people suffering from type 2 diabetes. They refrain blood sugar levels from rising suddenly post-meal, thereby playing a key role in diabetes management.

Likewise, several other studies have found that plant-based protein is a better choice for people suffering from chronic cardiovascular diseases, propelling demand for chickpea protein. In addition to such major health benefits, chickpea protein aids in reducing hair loss and in maintaining skin care, which is bolstering adoption in the nutraceutical.

The veganism trend is flourishing worldwide with the number of people practicing veganism growing year-on-year. For instance, the proportion of people practicing veganism in the US surged from 1% to 6% between 2014 and 2017. Likewise, the trend has caught up in Europe, with the UK being home to the majority of vegans in the region. This has opened revenue windows for players manufacturing plant-based alternatives, as the consumers move away from meat-based products.

As per the statistics of Food Allergy Research and Education (FARE) organization, over 32 Mn people in the US have some form of food allergy, which refrains them from consuming certain kinds of ingredients, mainly dairy products. Nearly 15 Mn of them are allergic to milk, eggs, wheat, and soy. Similarly, over 25% of Americans are lactose intolerant, which prohibits from digesting dairy products. These factors have been equally important in driving the demand for chickpea protein.

To cater to the widening base of the vegan population, the food producers are opting for plant-based protein alternatives in the production of several food products including bakery, confectionery, and snacks. This is expected to remain a crucial growth attribute to the market for the years to come.

Although chickpea protein powder has a healthy nutritional profile, certain side-effects are holding back the growth of the market. Excessive consumption of chickpea and chickpea protein ingredients can lead to severe digestive issues and damage the digestive system. Moreover, it also causes bloating and acidity, and this is likely to limit the adoption to an extent.

Moreover, the challenges associated with the production of chickpea and subsequent derivation of ingredients are expected to hold back manufacturers from reaching their full revenue potential. On a broader scale, producers of chickpeas are facing macro issues such as the ideal weather and soil quality. Chickpeas grow at the end of the rainy season, as they require the residual moisture in the soil. Fluctuating climatic conditions and the lack of ideal soil quality are restricting the large-scale production of chickpeas, subsequently lowering the availability of the raw material needed to produce ingredients.

In addition to the lack of availability, when not produced under the right conditions, the nutritional profile of chickpeas takes a severe beating which, in turn, reflects in the quality of the protein derived from it. All the aforementioned factors are posing as major challenges to the players operating in the market.

North America, led by the US is projected to remain at the vanguard of the regional landscape through the forecast period. The region's dominance is majorly attributed to the presence of a wide base of vegan population and people with allergies. According to the Harris Poll National Survey conducted in 2015, over 8 Mn of the people in the US are following a strict vegetarian diet, registering a rise from the previous year. Likewise, a study by Cambridge University found that 2 in 3 in Americans have either stopped or reduced consumption of meat, thus subsequently increasing demand for plant-based meat alternatives.

Sales of plant-based alternatives to animal-based foods including meat, cheese, milk, and eggs grew 17% in 2017 in the US, according to data from Nielsen. This is expected to directly influence the demand for chickpea protein in the years to come. Consumption of chickpea protein in the region is also favored by a large number of people with lactose intolerance, which necessitates them to seek dairy-free alternatives. This has played a crucial role in cementing chickpea protein as a fitting substitute in the food processing sector. Backed by these factors, North America is projected to channel more than 1/3rd of revenue to the global chickpea protein market.

Europe is projected to account for over 1/3rd of the share in the global market value, on the back of the growing trend of veganism in the region. For instance, according to a study conducted by the Vegan Society, the number of people practicing veganism quadrupled between 2014 and 2019 in the UK. The UK is currently leading the way for vegan food products, with one in six products launched in 2018 carrying a vegan or no animal ingredient label. This is expected to give a boost to the consumption of plant-based ingredients, including chickpea protein in the food processing sector.

On the other hand, the European Commission in November 2018 released a report that favored manufacturers in the region and announced policies to promote the production and consumption of soy, chickpeas, lentils, and rapeseed and ingredients derived from them. The move is expected to give a significant boost to the production and sales of chickpea protein in the region.

Asia Pacific - comprising East Asia, South Asia, and Oceania - is foreseen to cumulatively account for a share little below one quarter. Akin to the aforementioned regions, the growth of the market in these regions is attributed to growing inclination towards plant-based alternatives, backed by rising awareness regarding the adverse effects of animal-based protein.

Based on the product type, chickpea protein isolates and chickpea protein concentrates are projected to account for nearly 90% of overall market value. These two types are highly preferred among end-users on the back of their blending capability, which eases the amalgamation with food products during the preparation process. On the other hand, chickpea protein flour is gaining traction in the preparation of bakery, confectionery, and snack products as demand surges for gluten-free, organic, and vegan food products.

By nature, conventional chickpea protein is expected to remain the most sought out kind, owing to early penetration, lower cost, and easy availability. Backed by these benefits, the segment accounted for nearly 95% of the market share in 2019, and will remain the leading segment. On the other hand, the organic segment - although it holds a tiny share - will grow in value at a higher pace than its counterpart ascribed to higher nutritional value. 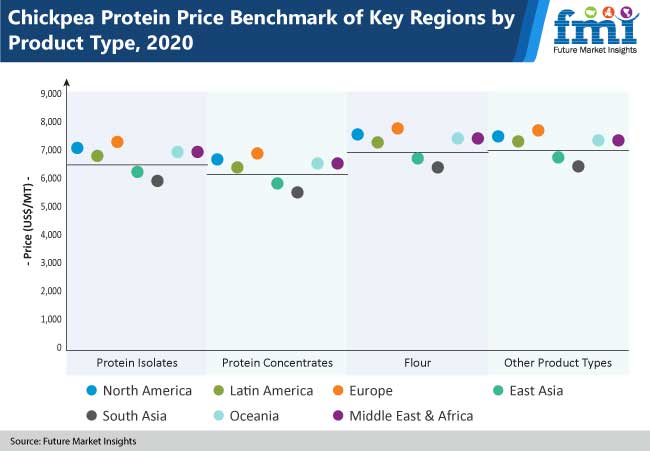 On the basis of the end-use, the food processing sector is forecasted to hold over 2/3rds of total market value. Chickpea protein finds significant adoption in the production of several bakery and confectionery products, meat alternatives, and functional foods. Among these, consumption in the bakery and confectionery sector is expected to channel the majority of revenue to the market.

Apart from the food processing sector, nutraceutical and sports nutrition segments are expected to emerge as prominent end-uses, where chickpea protein finds remarkable traction owing to its health benefits.

Launching high-quality products that suit specific requirements of end-use industries has been identified as the major growth strategy adopted by players operating in the chickpea protein market. Along similar lines, manufacturers are now offering customized protein ingredients, based on their needs and application. Moreover, market players are spending on research and development activities to manufacture superior quality chickpea protein and are expanding to developing regions to tap on the unexplored potential.

On these lines, in April 2020, InnovoPro, an Israel-based player announced that the organization secured US$ 15 Mn in funding from Jerusalem Venture Partners and with the participation of CPT Capital to boost production of chickpea protein. Around the same time, Singapore-based The Growthwell Group raised funds worth US$ 8 Mn from the Singapore government and other organizations to produce chickpea protein in the region.

Some of the key players operating in the chickpea protein market are:

What is the market size of the chickpea protein market?

The global chickpea protein market is expected to reach a valuation of US$ 142.4 Mn by 2030.

Which is the largest regional market for chickpea protein?

Which are the top companies in the chickpea protein market?

Which end-use segment is expected to channel the majority of revenue to the chickpea protein market?

The food-processing segment is expected to channel the majority of revenue to the chickpea protein market through the forecast period.

What is the outlook on the chickpea protein market?

The growth of the protein ingredients market is primarily attributed to the growing trend of veganism and shifting preference towards plant-based ingredients.