Growth in demand for advanced neuroscience devices that are used for neurosurgeries is likely to face challenges owing to lack of proper healthcare infrastructure in emerging markets such as Latin America and the Middle East and Africa. This particular factor is expected to limit revenue growth of the global cranial stabilisation devices market over the period of study. Another factor that is restraining the growth of the market is the improper development and implementation of clinical practice guidelines.

Besides, the shortage of skilled professionals in most countries in Latin America and Middle East and Africa is also hindering the growth of the cranial stabilisation devices market. An irregular regulatory framework pertaining to healthcare devices in some countries also poses challenges to the growth in revenue of the cranial stabilisation devices market.

Absence of health insurance and limited support from government bodies in terms of reimbursement policies pertaining to the affordability of neurosurgery and treatments associated with various neurological disorders is a major concern for a large chunk of the population in under developed countries as well as in some of the developing economies of the world. Further, the absence of social health insurance in some countries is expected to act as a deterrent to the revenue growth of the cranial stabilisation devices market.

Cranial stabilisation devices such as brain retractor systems and skull clamp systems are used to hold a patient’s neck and head in a firm position to ensure rigid fixation during a surgical procedure. Such devices are also used for skeletal fixation during spinal surgery. Sometimes, there are adverse effects owing to the false operative functionality associated with these devices and this can restrict market revenue growth to a certain extent. 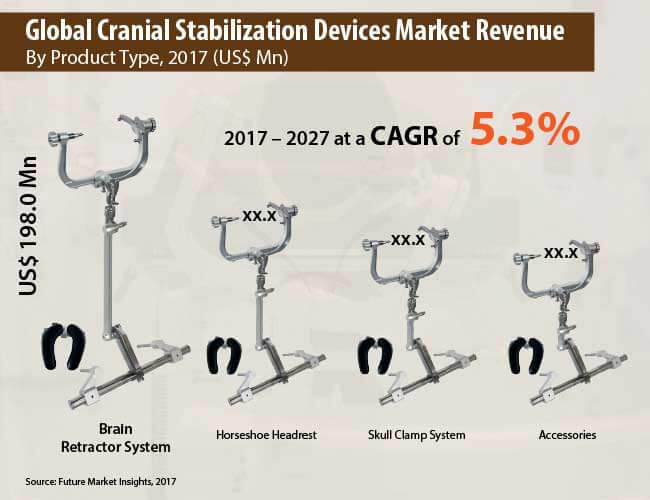 Although the brain retractor system segment currently dominates the global cranial stabilisation devices market in terms of revenue, skull clamp system is the fastest growing product type segment with a growth rate of 6.0%. The skull clamp system segment remains the third largest market in terms of market share and represents a market share index of 1.0. The horseshoe headrest segment is expected to be the second largest market for cranial stabilisation devices, with a market share index of 1.1.