Fibre to the Home Market

Future Market Insights has captured the pulse of the global fibre to the home market in its new research publication. Future Market Insights’ take on the market reflects that the global fibre to the home market is expected to rise at a healthy pace to reach a noteworthy valuation by the end of the period of forecast. The global market has been witnessing high growth even in its nascent stage. It is projected to grow at a high CAGR of 14.4% throughout the period of forecast.

In 2017, the global fibre to the home market was valued at about US$ 9.5 Bn and is estimated to reach a valuation of more than US$ 37 Bn by the end of the assessment year. This meteoric growth can be attributed to rising demand for better internet infrastructure, rising construction in emerging economies and increasing rapid industrialization programs.

Rapid industrialization is taking place in regions such as Eastern Europe, which is expected to be a lucrative opportunity for the telecom sector to give high speed Internet to businesses, and to expand their business in the respective regions.

Developing countries such as India and China are expected to highly contribute to the growth of the global FTTH market. Establishing strong supply chains and distribution channels are major practises followed by India and China to expand business opportunities.

The smart home concept is expected to drive the fiber to the home market in developed economies, such as North America and Western Europe. Therefore, emerging application of smart homes is expected to have better expansion opportunities for FTTH service providers in the respective regions.

Internet TV segment in the use cases category is anticipated to grow at a significant rate to reach a value more than US$ 7 Bn by the end of 2027 from an estimation of about US$ 1.9 Bn in 2017. This 3x increase in growth is marked by a high CAGR of 14.2% throughout the period of forecast, 2017-2027. Internet TV segment is likely to lead the global market in the coming years. The VOIP segment in this category is the second largest in terms of market value.

However, this segment is poised to grow at a comparatively slow rate than other use cases segments during the forecast period. This segment dominates the market in 2017 as it reflects high value than other segments, however, by the end of 2027, it is expected to be the second largest. In 2017, it is valued at about US$ 2 Bn and is estimated to reach a valuation of around US$ 6.9 Bn by the end of the assessment period. 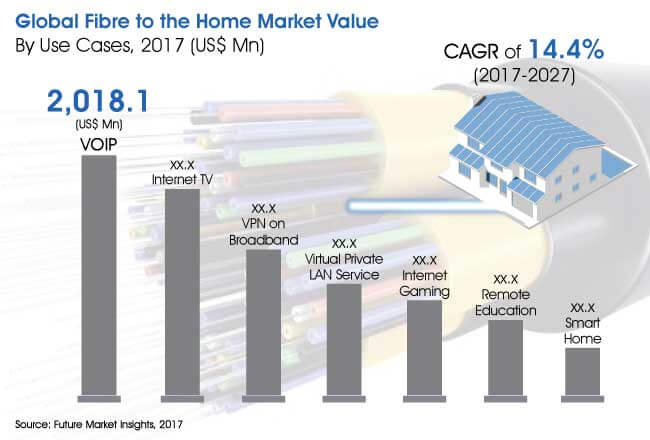 Remote education and internet gaming to grow at the same pace

In North America, the internet gaming segment is the largest in the use cases category. It is poised to grow at a high CAGR of 14.7% to reach US$ 1.2 Bn by 2027 end. In Latin America, the VOIP segment is expected to hold high market share and is a fast growing segment in this region.

The VOIP segment is estimated to reach a value of more than US$ 560 Mn by 2027 end. In Asia Pacific excluding Japan (APEJ) region, the internet TV segment is expected to dominate the market followed by VOIP segment in the coming years.

The research report on global fibre to the home market covers a detailed segmentation with the help of which several inferences about the market growth, regional scenario, sub segment breakdown, etc., can be drawn.

Fibre to the Home Market