Modified soya flour are used in various industrial products and several food items as binders. They are characterized by their solubility and absorption properties, increasing the functional properties of the respective food item. Future Market Insights has presented a global outlook on modified soya flour market by carrying out extensive research that covers various applications, sales channel, ingredients of modified soy flour and analysis of these parameters across various regions in the globe.

Moreover, the macroeconomic aspects that have influenced the growth of the global market for modified soya flour are also included in this research report. The research study comprises of a detailed market segmentation that ensures complete market information on modified soya flour. Various trends, developments, drivers and challenges impacting the growth of modified soya flour across various regions in the globe are mentioned that gives a clear understanding regarding potential nature of regional markets basis which effective expansion decisions can be taken. 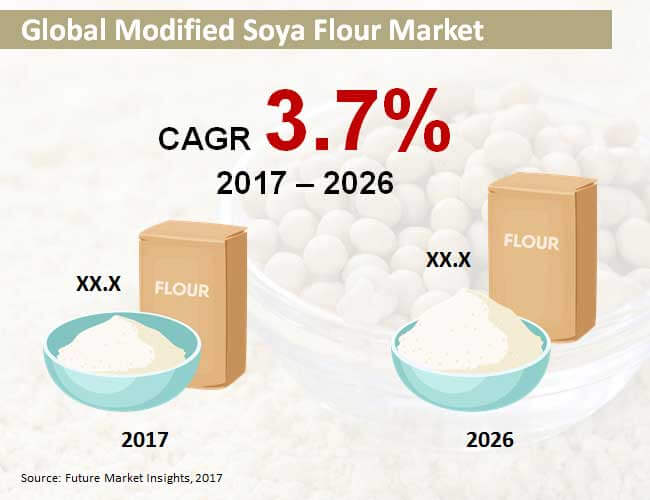 Download a Comprehensive Report Snapshot
As per the insightful research report on global modified soya flour market, the global market is expected to soar at a significant volume CAGR during the forecast period. The global modified soya flour market is estimated to reflect a volume of more than 70,000 tons by the end of the year of assessment (2026) from a volume of over 51,000 tons in 2017.

Modified soya flour market is also impacted by the type of ingredients used. According to the research report, activated carbon segment in the ingredient category is widely used in modified soya flour. The research states that with respect to volume, activated carbon segment is expected to surpass 13,200 tons by 2026 end. On the other hand, phosphorus chemicals are gaining high steam, thus making this segment a fast growing one and is projected to register a comparatively high volume CAGR of 5.8% throughout the period of forecast. Succinic acid segment is also projected to gain high traction in the coming years.

Competition at a Glance

A weighted market segmentation is carried out to fully analyse the global market for modified soya flour.