U.S. variable frequency drive market revenue is anticipated to expand at a moderate CAGR over the period 2017–2027

Variable frequency drive sales value and volume consumption in the U.S. is projected to expand at the highest CAGR over the forecast period. In 2016, the U.S. variable frequency drive market was valued at more than US$ 3,300 Mn and has been estimated to increase to a little more than US$ 3,500 Mn by 2017 end, reflecting a Y-o-Y growth rate of 5.9%.

The U.S. country market is anticipated to create incremental dollar opportunity of close to US$ 3,000 Mn between 2016 and 2027 in the North America variable frequency drive market. In terms of market value, the Canada variable frequency drive market was valued at US$ 911.8 Mn in 2016 and has been estimated to increase to more than US$ 950 Mn by 2017 end, reflecting a Y-o-Y growth rate of 5.2%. 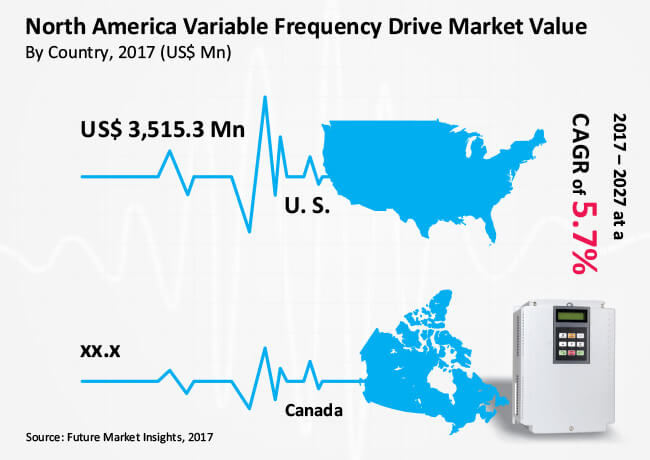 Escalating energy prices has created the need for energy-efficient motor control systems. With the aim of reducing energy consumption, process engineers and other executives managing the operation department are increasingly inclined towards deployment of variable frequency drives. It acts as a substitute to throttling devices such as general valves, industrial valves and dampers and fixed speed controllers.

Variable frequency drives, when installed along with a flow-meter also known as intelligent flow meter, ensure appropriate water volume and eliminate energy wastage due to worst-case design philosophy. All these positive aspects are driving the U.S and Canada variable frequency drive market.