Amid the COVID-19 pandemic, the global paleo foods market continues to make rapid strides owing to rise in consumption of healthy foods. As people realize the importance of healthy eating, people are switching over to naturally available foods.

For instance, the United States has 38,000 supermarkets, thereby providing a fertile ground for the paleo food market’s proliferation across the region. More recently, sales have equally surged via e-commerce portals.

Entomophagy is fast emerging as a promising domain in the paleo foods segment. Nearly 33% of North Americans show an inclination towards insect consumption, with several cricket-flavored protein bars rapidly filling supermarket shelves across the continent.

Likewise, a series of government regulations have approved sales of mealworm burgers since 2014 across the Netherlands and Belgium. This trend is already prevalent across key Asian countries such as Thailand, China, South Korea and parts of India since ancient times.

Paleo vegetables and fruits are expected to remain the preferred food choices by consumers, attributed to increasing health consciousness. Regenerative agriculture is equally fueling the segments’ expansion for the future.

Players such as Danone North America and Stonyfield have pooled in financial resources to develop a research framework to analyze the impact of regenerative agriculture. Also, in March 2019, General Mills announced the initiation of research, education and training in this field.

By end-use, the cereals segment is likely to be the main revenue generator. This is largely attributed to the growing demand for the intake of high-fiber and protein diets across the world. Furthermore, introduction of exotic and innovative flavors is providing stimulus to the segment.

The COVID-19 pandemic has had a significant impact on the global paleo food market, leading to is proliferation in recent months. As restaurants and outdoor food settings remain shut, online food delivery has surged. According to Credit Suisse, 80% American households increased their spending on food at home.

This is way higher than the 2018 share of 47.6%. Likewise, an increase in online grocery and food shopping due to mandatory social distancing protocols is likely to provide substantial impetus to the paleo food market across the Asia-Pacific region.

US to be Fastest Expanding Market

North America is likely to be the most lucrative paleo food market in the forthcoming forecast period. Around 1-3 million people in the United States follow a paleo diet, providing several collaborations between existing manufacturers along with the entry of various start-ups. 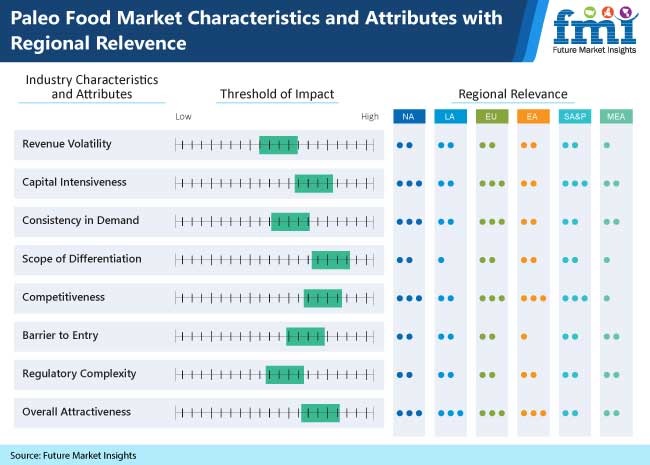 Furthermore, growing popularity of paleo foods has generated a series of macro-level acquisitions. For instance, in April 2020, GrubMarket Inc. acquired Boston Organics LLC. Likewise, the preceding month witnessed the acquisition of Smart Foodservice Stores LLC by US Food Inc. for a sum of US$ 970 million.

The global paleo foods market is characterized by the presence of numerous regional and global level manufacturers, rendering it is significantly competitive. Prominent players include*:

*This list is indicative- full details about the paleo foods market players is available upon request.

Strategic collaborations, acquisitions, product launches and innovations are the common strategies employed by the aforementioned players. Furthermore, to expand their customer base, manufacturers are targeting emerging economies as they have a wide high-income population base.