The population in North America is extremely concerned about their health and demand safe drinking water, even when compared to other developed economies such as Europe and Japan. North American governments supply relatively clean drinking water by way of public water utilities.

Nonetheless, people on this continent are unsure of the quality of water, and they invest in machines sold in the residential water treatment equipment market. The U.S. uses more than 40 billion gallons of water daily and 80% of their drinking water comes from lakes, reservoirs, and rivers.

In a few areas of Eastern Europe, chemical contaminants have played havoc with the quality of drinking water. Non-microbiological contaminants such as arsenic, lead, nitrogen, and fluoride affect the drinking water in some Eastern European countries. The population is quite worried about the health implications of dissolved lead in water and this is primarily attributed to plumbing pipes that are replaced infrequently.

Another factor is arsenic that is also called the human carcinogen. High arsenic concentrations are naturally found in Romania and southeast Hungary where chemical precipitation technology is now deployed to remove arsenic from the water.

Increasing industrialization and rampant pesticide use has had a devastating impact on ground water reserves in Latin America. Major water bodies that supply drinking water to millions of people in the region have been contaminated with organic pollutants and heavy metals. A World Bank report stated that 70% of the water used in South America returns to the source without any treatment and 80% of the urban population live close to polluted water bodies. Needless to say, this is a major health concern.

A study in December 2013 showed that more than 90% of Uruguay’s rivers were contaminated. The National Committee of Water estimates that 70% of Mexico’s rivers are polluted and no tangible steps have been taken to prevent or reduce further contamination. Such sobering statistics make it an urgent priority to raise awareness of residential water treatment equipment devices in the region. 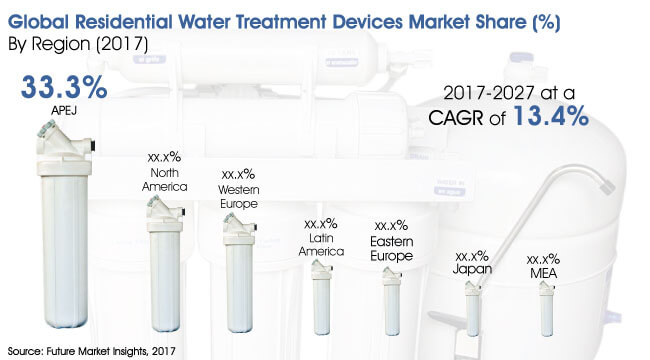 Governments unable to cope with population explosion in APEJ

In 2013, the United Nations assessed that the APEJ region accounted for roughly 60% of the global population. A UNICEF report said that the population growth rate is far outstripping the number of people gaining access to safe drinking water in this region.

These purifiers cost less than US$ 60 making them the perfect option for price-sensitive buyers. More than a billion people in APEJ do not have access to electricity, making these products vital in the residential water treatment equipment market.