Smart TVs, as considered under the scope of the report, are adopted across various end-use areas in order to provide an enhanced audio visual experience to the audience. As high speed Internet has become easily affordable, viewers/audiences that prefer good quality content are preferring smart TVs over other television systems. Also, the growing admiration for OTT streaming in audio visual content is impacting the overall smart TV market in a positive manner.

Unlike a few years back when smart TVs were not very common, the Smart TVs in present times have not remained eluded from smart homes. With advancements in technology such as 4K UHD, OLEDs, and quantum dot technologies, people expect to enjoy a better viewing experience along with the ease of usability of household devices, which is provided by their smart homes. Hence, the increasing adoption of smart homes throughout the world is also pushing the market for smart TVs.

Apart from smart homes, smart TVs are nowadays also being adopted in various educational institutes, healthcare institutes, and hotels, as well as in commercial shopping complexes. Such a high adoption rate of smart TVs in various application areas is expected to drive the smart TV market during the forecast period.

On the basis of screen type, the global smart TV market can be segmented into 28 to 40 inch, 41 to 59 inch, and 60 inch & above. The 28 to 40 inch segment is expected to account for a sizable share of the overall smart TV market in 2017, but is expected to foresee a decrease in the growth rate yearly, due to the embellishment of the 60 inch & above screen type segment by the end of the forecast period. One of the important factors for this drift in the smart TV market is the change in customer spending patterns for luxurious products.

Nowadays, customers prefer going for smart TVs which have bigger screens and better visibility, for their luxurious living rooms. The 41 to 59 inch screen type sub-segment is also expected to foresee considerably high adoption, and is expected to follow the 60 inch & above sub-segment in the smart TV market. Such high growth rates in the smart TV market are primarily driven by transformation in customer shopping preferences and high the preference given to lavish entertainment devices.

The smart TV market in APEJ is pre-dominantly organized, but various local players are also inclined towards providing smart TV solutions at reduced costs. With more than approximately half of the world’s Internet users, APEJ is a home to the fastest growing Internet penetration in the world. Technological advancements, adoption of services such as e-Commerce, cashless payments, and social media attract the young and tech savvy smart TV customers.

Particularly in China, a large volume of free content is present, owing to which, China is one of the major revenue contributors in the APEJ smart TV market. APEJ is expected to be followed by North America and Western Europe in the smart TV market in terms of revenues generated. Entertainment is the major driver for the adoption of smart TVs in North America, along with high Internet penetration, and continuous technological advancements in the entertainment industry.

Also, the ease of accessibility to good streaming content in the Western European region can be expected to drive the market growth. A large number of video streaming content providers are collaborating with smart TV manufacturers to provide a substantial amount of video content to customers, attracting more and more customers towards buying smart TVs. The sales of smart TVs in Western Europe are projected to represent a total incremental opportunity of US$ 211 Bn. during the study period. 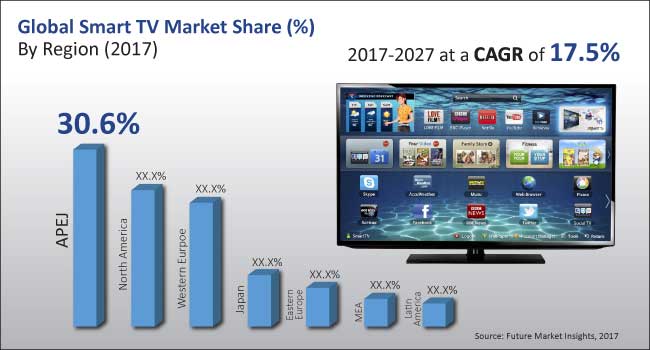 Vendors are continuously innovating their smart TV solutions to penetrate the technology-influenced market. Samsung is focussing on launching innovative solutions in order to provide an improved user experience, and expand its customer base in its smart TV segment.

In May 2017, Samsung launched the new SAMSUNG ARTIK 053 module, which is an affordable IoT solution with high-performance and hardened security for next-generation edge products. Also, the company partnered with you.i TV, which is a video app platform provider, to expand its product portfolio in reference to smart TVs. Panasonic is also focusing on launching innovative smart TV products in order to provide an improved user experience and sustain its position in the market.

In April 2017, Panasonic launched its new 2017 Smart TV range with its 'Master' 4K Pro, Ultra HD, OLED as its flagship product. With reference to smart TVs, LG has upgraded its portfolio in order to expand its customer base and sustain its position in the overall smart TV market. In June 2017, the company launched a new range of OLED smart TVs in the market, consisting of five models with the latest WebOS 3.0 user-interface, which provides seamless, intuitive navigation.