Consumers are increasingly inclined towards adoption of premium electronics products such as smartphones and laptops. In order to give these devices a rich feel, manufacturers are laying emphasis on adoption of soft touch polyurethane coatings for the body of such devices that helps give it a premium feel, while enhancing its handling.  Also, these coatings help provide primary protection to the body of the device from accidental drops and scratches.

Plastics are widely used as raw material in various end-use industries, such as automotive, electronics and packaging, as it is lightweight, low cost and durable. However, plastic loses its characteristics on exposure to extreme heat and on exposure to certain chemicals. Researchers have developed UV soft touch coating that get cured on exposure to ultraviolet light and imparts resistance to chemicals, insects and abrasion. UV curable soft touch coating is a new technology and is gaining application across various industries.

Various government regulations regarding the same is influencing players in the coating industry to focus on formulation of water-based coatings. Formulation of water-based soft feel polyurethane coating is complicated as compared to conventional solvent coating, due to presence of water in the former. Polymer containing hydroxyl functional group i.e. polyols and polyisocyanate are used to formulate polyurethane.

Water reacts with isocyanate and release carbon dioxide gas. However, it also results in side reactions where primary amines are formed and react with isocyanate to form urea linkage. There is a need to control these side reaction in order to achieve desired properties. The challenge for coating formulators is to measure haptic perception, there is no standard measurement method to evaluate desired properties of soft feel coatings.

On the basis of end-use industry, the global soft touch polyurethane coatings market is segmented into transport and automotive, electrical and electronics, wood and furniture and others (packaging, measuring devices). In 2014, the transport and automotive segment accounted for largest market share and is expected to remain dominant throughout the forecast period.

This increased use of plastics in automobile interiors has led to increase in demand for soft touch PU coatings as a suitable option, owing to properties such as resistance to yellowing, scratching, abrasion and chemicals. Soft feel polyurethane coatings are widely used in the automobile industry to coat interior components such as arm rest, door trims, airbags compartments, steering wheel and front panels. It helps automakers offer customers durable and aesthetically pleasing automobile interiors. 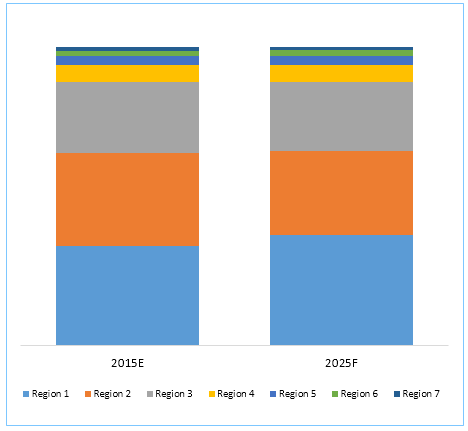 Base types assessed in the report are as follows:

Product types accessed in the report are as follows:

End-use industry assessed in the report are as follows:

Regions assessed in the report are as follows: