Sales of 3D Printed Medical Devices to Quadruple Through 2029

The global landscape of 3D printing or additive manufacturing will soon represent a multi-billion-dollar industry. Its application in the medical devices sector has been creating a lucrative opportunity for manufacturers. In 2019, 3D printed medical device sales would account for revenues of over US$ 400 Mn, which will experience fourfold growth towards the end of forecast period (2019 - 2029). As 3D printing technology helps medical device manufacturers to achieve high complexity, high sterilization, and digital monitoring, all at reduced overall costs, the investments in 3D printed medical devices will continue to gather traction.

Medical uses of 3D printing technology are revolutionizing healthcare industry by providing benefits such as customizations, personalization of medical products, and increased productivity. Some studies suggest that custom surgical guides and medical models with 3D-printing technology will become standards for diverse surgical procedures such as joint replacement, cranial implants, spinal surgeries, and cardiac surgeries in next few decades.

As of now, application of 3D-printing in operating room is restricted to only few procedures, but surgeons can plan their procedure in advance resulting in minimal manual error and faster completion of surgery. Surgeons, prior to a complex surgery, study CT scan data of a patient’s blood vessels, bone or other organs by converting it to a digital file with the help of 3D-printing, which can be studied and manipulated. Through printed custom tools and guides, 3D Printed Medical Devices are the perfect fit for surgeries involving cutting and drilling such as joint replacement surgeries.

Similarly, in China, government is providing funding for establishment of manufacturing facility for production of biomaterials and study of 3D printed organs and tissues. In 2013, the Ministry of Science and Technology of China announced investment of US$ 6.5 million in 3D printing research and development. Such initiatives are expected to enhance existing standards and identify gaps in the industry, which in turn is expected to boost the coordinated growth of stakeholders in the 3D printed medical devices market. 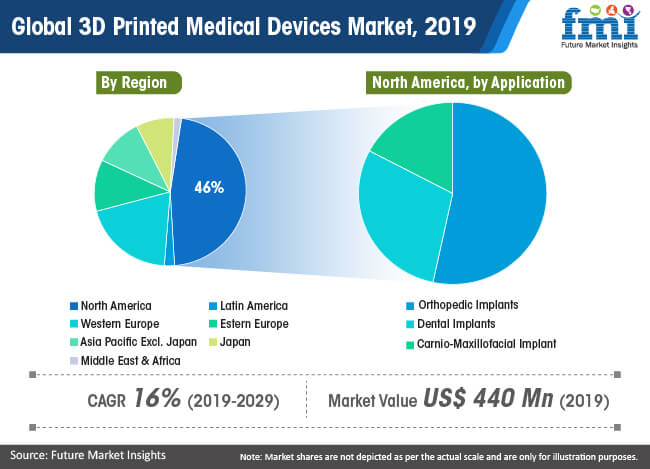 Increasing adoption rate of 3D printed medical devices in various medical applications such as 3D printed orthopedic devices asl well 3D printed dental devices has been triggering innovations in the same, particularly in biomaterials that are used in their manufacturing. Offering superior efficiency, metals and alloys accounted for over 65% revenue share in market. Manufacturers’ preference for biocompatible metals and alloys is primarily attributed to the fact than metal enables immediate mobilization of patients with ultimate support and prevents complications. Bioprinting is emerging as a popular technique of manufacturing 3D printed medical devices, which is pushing preference for biomaterial inks among manufacturers.

The growth of healthcare industry has been exploding in developed regions that are adopting a value-based business model. Of late, healthcare organizations have been undertaking a research-based approach towards improving their surgical outcomes. This is triggering the adoption of 3D printed medical devices among end users in developed regions such as North America and Europe. In 2018, both these regions accounted for over 3/4th revenue share in global market and the trend will continue through 2029.

In Sync with Personalized Medication Trend

While manufacturers are introducing improved designs of 3D printed medical devices, they now intent to sync with the latest industry trend, i.e. personalization. Customized or patient-specific 3D printed implants have been here for a while and they continue to allow the 3D printed medical devices manufacturers to boost surgical outcome. Leading market players are intensifying their focus on devices catering to patient-specific requirements in a particular application. This would help them ride the coattails of trends in the personalized medicine landscape.

Adoption of biomaterial inks to surge

Increasing adoption of 3D printing technology in various surgical implants is expanding the scope for innovation. Heavy investments in orthopedic implants will continue to account for more than 60% of market revenues during the forecast period. Leading market players are increasing the use of novel additive manufacturing technique for introducing 3D printing based patient-specific orthopedic implants to leverage this trend, over the course of following years.

Based on end user, the 3D printed medical devices market is segmented into hospitals, ambulatory surgical centers, and diagnostic centers. In this chapter, readers can find information on market attractive analysis based on end user.

This chapter includes a detailed analysis of the growth of the North America 3D printed medical devices market along with the country-wise assessment including the U.S. and Canada. Readers can also find key takeaways of this region, and market growth based on application, materials used, different technology used, end user and country of 3D printed medical devices in the North American region.

Important growth prospects of the 3D printed medical devices market based on its application, materials used, different technology used, end user and country in several Western European countries such as the U.K., Germany, France, Italy, Spain, Russia, Nordic, BENELUX and Rest of Western Europe are included in this chapter.

This chapter provides information on how the 3D printed medical devices market will grow in the major countries in MEA region, such as GCC Countries, South Africa, Northern Africa, and Rest of MEA during the period 2019-2029.

This chapter includes a list of acronyms and assumptions that provide a base to the information and statistics included in the report. 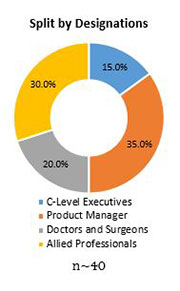 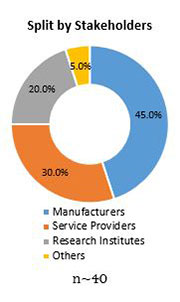 To Learn More About our Comprehensive Perspective on 3D Printed Medical Devices Market,