Growth trends are forecast to remain positive, with FMI projecting volume sales to rise at 4.8% CAGR between 2021 and 2031.

Leading players, including Thyssenkrupp AG, KYB Corporation, ZF, Tenneco, Marelli will account for nearly 55% sales in the market in 2021.

The automotive gas charged shock absorbers market is anticipated to grow at a CAGR of 5.0% over the forecast period 2021-2031. 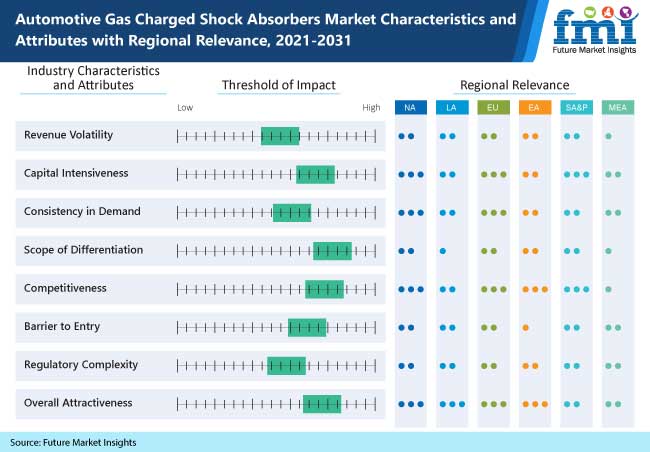 Market players are focusing on developing new products and investing in innovations in order to expand their product portfolio.

For instance, in 2018, Koni Shock Absorbers, a key leader in adjustable suspension technology, announced the launch of its new special active damper product line, the latest evolution for their distinguished portfolio of performance suspension solutions.

Meanwhile, in 2021, KYB announced the launch of the KYB Actimatic Damper System (KADS), which is an electronically monitored semi active suspension system. It is designed for motorcycles which combines hydraulic technology and control technology. KADS offers the rider a sensation of being grounded to the road, thereby ensuring improved control and stability.

Demand in Passenger Car Segment Underpins Growth in the Market

Governments’ thrust on infrastructure and macroeconomic environment buoyancy is expected to keep the momentum strong in 2018, subsequently propelling the demand for automotive gas charged shock absorbers in luxury cars and utility vehicles. Additionally, China remains the growth engine for the global passenger cars market. The China passenger car market is still receptive despite the mammoth number of vehicles.

The twin segment is expected to represent US$ 2,335.9 Mn in the market in 2018 and US$ 3,517.2 Mn in 2027 while expanding at a CAGR of 4.7%. Also, the twin segment in the global automotive gas charged shock absorbers market to grow by US$ 236.3 Mn annually over the course of the forecast period and this absolute growth is substantial than the growth of any other segment.

Relatively stable economic conditions, increasing industrial production and steady growth in automotive industry are the key factors expected to drive the growth in demand for Automotive Gas Charged Shock Absorbers in North America and Europe. North America is expected to dominate the global Automotive Gas Charged Shock Absorbers market, in terms of value and volume, during the forecast period.

APEJ is expected to gain traction over the forecast period as a consequence of the anticipated surge in the performance of manufacturing and automotive sectors, whereas all the other regions are expected to exhibit moderate growth during the same period.

In the recent past, the Automotive Gas Charged Shock Absorbers market has been observing significant developments from a competition perspective. Manufacturers of automotive gas charged shock absorbers are focusing on increasing their presence in the aftermarket of South East Asian Countries owing to the prolific opportunities present there. Also, India-based manufacturers are poised to increase exports to developed automotive gas charged shock absorbers markets of North America, Europe, Australia and Asia-Pacific region.