With the disposable income of consumers across both developed and developing regions rising at an exponential rate, the demand for passenger cars is also increasing wherein healthy procurement and on road fleet for all classes of passenger car cars have been recorded across the regional markets of the globe. With this burgeoning demand of automotive cars , the production rate of new units has in turn increased at OEMs.

As a result, the demand for automotive pillars in design of vehicle chassis unit is expected to rise at an extensive rate in the near future. Automotive pillars are made of metal alloys such as steel and aided with a reinforcing agent.

Asia Pacific except Japan is expected to take a lead in the global automotive pillar market above all regions owing to the burgeoning population in the region coupled with the altering needs of consumers. As a result of the growing disposable income of consumers in APEJ, the demand for automobiles has increased significantly with the demand for related parts used in automotive manufacturing also rising. The governments in the region have also imposed stringent regulations pertaining to the safety of passengers in cars, which has compelled manufacturers to opt for advanced support items, thus boosting the demand for automotive pillars as well.

Moreover, the demand for electric and hybrid vehicles is also rising in the region, in turn supplementing the growth of the market. With growing implementation of stringent environmental regulations and emission control measures, the adoption of Hybrid and Electrical Vehicles (HEVs) is rising globally. Growing automation and inclination of customers towards electric and hybrid vehicles is increasing the demand for automotive pillars in the APEJ market.

Manufacturers in the region are already positive about increasing the percentage of electric and hybrid cars available in the market. The number is projected to increase in the near future as both vehicle manufacturers and buyers seek more eco-friendly alternatives, giving impetus to the market for hybrid and electric cars, which in turn will accelerate the demand for automotive pillars in the regional as well as global market. 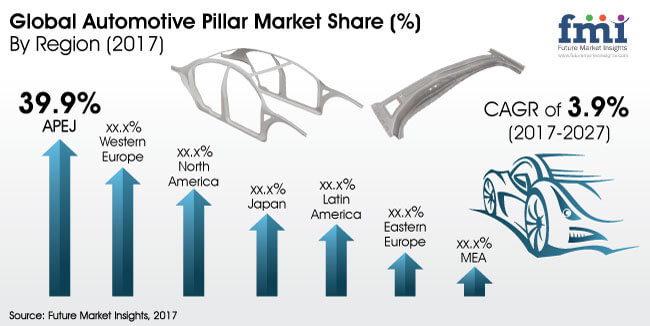 With countries such as Poland, Germany, Slovakia, Hungary, Greece, Austria, and Czech Republic, Western Europe houses some of the core economies of Europe. The laws pertaining to the safety of drivers and passengers is also high in the region. As a result, the automotive manufacturers in the region are focussing on the safety of their vehicles by integrating advanced products in automobiles, thus triggering the sales of automotive pillars at the same time.

The presence of several leading players in the market is also expected to supplement revenue growth of the automotive pillar market in the region. Prominent market participants are investing heavily in research and development, which is intended to help implement new features in automotive pillars.

The introduction of new and advanced technologies is further fuelling the use of commercial vehicles among consumers, which will in turn accelerate growth in the automotive pillar market in the region. The advancement in research and development has led manufacturers to make pillars that can bear the varied climatic conditions of the region and can maintain their properties without undergoing any variation. Manufacturers are providing design iterations along with modified thickness, material type and shape changing ability to increase formability requirements and structural strength.