2019 Analysis and Review of Automotive Refinish Coatings Market by Product - Primer, Base Coat, Top Coat, and Clear Coat for 2019 - 2029

Establishment of manufacturing facilities in economically-growing regions, increasing road accidents, and customization of vehicles are some factors that are expected to drive the refinish coatings market growth.

Sustained Demand from the OEM Sector to Augment Market Growth

The aftermarket segment has a higher market share in comparison to the OEM segment and increasing new vehicle registrations create a positive impact on the consumption of automotive refinish coatings & paints as new vehicle owners are more likely to invest in repairing vehicles. Increasing number of aftermarket modifications and road collisions are anticipated to be other drivers for the automotive refinish coatings market growth.

Presence of vehicle manufacturing companies such as Bombardier, Suzuki, Bugatti, Ducati, Toyota, Lamborghini, Tesla, and Volvo, among others is driving the growth of the OEM segment of automotive refinish coatings. Development of new products, advancements in technology, and increase in the production and sales of luxury, compact, and mid-size vehicles are estimated to propel the growth of the global automotive refinish coatings industry. 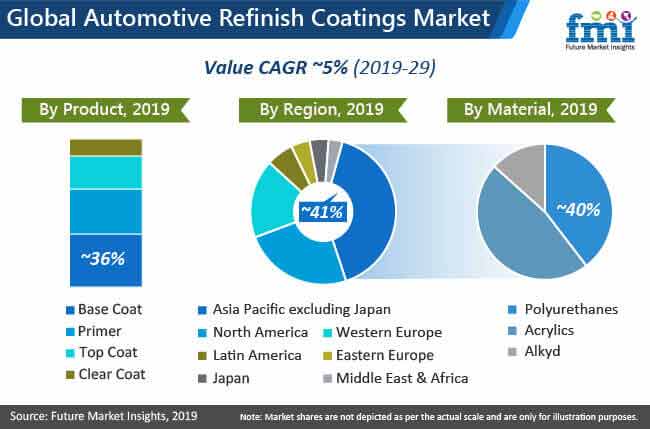 Significant progress has been made in the sector with waterborne basecoat to reduce the impact of VOCs, thereby contributing to market growth. By 2020, sales of waterborne refinish coatings will match-up to their solvent counterparts that currently account for a leading market share.

Despite North America’s continued primacy in global market, research reveals lucrative growth prospects of the market in Asia Pacific (APAC). Emergence of China and India as the global automotive hubs has led to realignment of stakeholders’ strategies. Accounting for over 40% revenue share, APAC continues to be a promising market for automotive refinish coatings.

While the recently recorded dip in auto sales within developing countries has affected every segment of the industry, growing demand for pre-owned cars will possibly open a new window of opportunity in automotive refinish coatings market.

With a surge in number of eco-conscious consumers, key players in global automotive refinish coatings market are moving ahead with new ideas and technology associated with ecologically responsible products. Waterborne UV-curable coatings are thus developed to replace conventional VOC-based coatings.

Manufacturers are however hard pressed to innovate and add environmental aspects to final product for commercial vehicles. Product premiumization is further reflecting profits through high performance and reduced environmental impact.