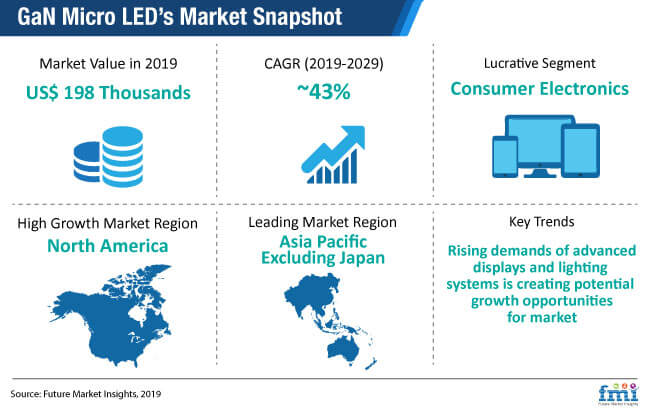 The GaN Micro LED market is being driven by the demand for automotive and advanced display lighting solutions that enable users to utilize IoT systems in better way with best quality in display and lighting solutions for the long-term management with high growth in future.

The emergence of new technologies, Internet of things (IoT), and high quality Display applications on Demand is impacting the growth of the GaN Micro LED market.

The Gallium Nitride based LED are highly efficient sources for illumination. GaN micro LEDs supports multi gigabit per second Visible light communications (VLC) uses these sources to supplement wireless communications by offering large, license free region of optical spectrum. This solution are boosting customer inclination to use micro LED displays and other solutions such as ambient lighting for interior lamp designs inside the car are among the factors impacting the growth of the GaN Micro LED market.

On the other hand, the growing trends of Internet of Things (IoT) systems is expected to affect the growth of the GaN micro LED market. The development of more efficient high-performance featured GaN LED will be from smartphone industry. The sports and entertainment sector is expected to rely heavily on micro LED as they promise brighter displays and long running mobile devices with faster response time.

The near to eye devices like AR and VR poses higher requirement on size and weight to achieve best user experience. The projection technologies are based on micro display that integrates all pixels showing images or video into monolithic IC module. GaN or InGaN LED can reduce the volume of light source and overall weight with better display contrast. Wafer fabrication technology helps in simplifying the transfer process of micro LEDs.

The availability of micro LEDs as a single pixel helps to produce high intensity, collimated light over a small area or to produce useable light at ultra-low current and power. The main advantage of using GaN micro LED is that the optical power and luminous intensity are normalized to the pixel area for display brightness.

The growing adoption GaN RF devices in military, defense and aerospace applications and The use of GaN based LEDs for interior and exterior lighting such as headlights and signal lights, car interior lighting, fog lights, stop lights, and dome lights in the automotive industry has also contributed to the larger market size.

The market for GaN based micro LED power devices is expected to grow significantly during the forecast period of 2019–2029 due to superior features such as minimum power loss, high speed switching miniaturization, and high breakdown voltage compared with silicon-based power devices. 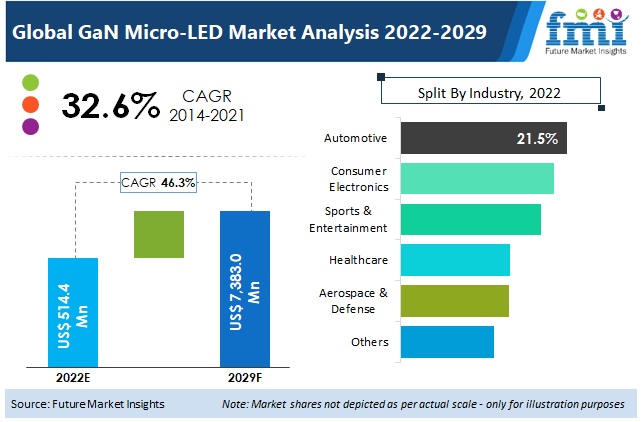 Over the years, technologies empowering digital experiences have steadily disrupted business models and markets. Each transformation in the technology industry is typically illustrated by a leap forward in how today’s consumers interact with and apply technology in their daily lives. From large frames to desktop PCs; tube televisions to projectors; plasma screens to LCDs; and now from OLEDs to Micro-LED, high-tech screen technologies continue to witness a massive wave of transformation and innovations.

Although LCDs and rapidly maturing OLED displays have been the high-end electronic display of choice, they are power hungry and do not offer high level of brightness; therefore, the manufacturers’ war for innovation supremacy continues.

To that end, a number of optoelectronic technology solution providers such as Plessey have announced to cease the launch of new lighting LEDs and focus entirely on GaN micro-LED-based displays.

Following its debut in Samsung’s ‘The Wall’- a massive modular MicroLED TV, an array of millions of microscopic LEDs is set to oust OLEDs as the next big display technology. An embrace of R&D investment and initiatives has been underway to develop technologies for fabricating highly efficient GaN micro-LEDs for application ranging from TVs to smart watches with no size limit.

As the demand for digital visual spikes and human-machine interface remains at the forefront of design and engineering, a rapid ascension of GaN micro-LED sales is on the horizon. Moreover, future expansion of GaN micro-LED market is likely to work in tandem with consumers seeking out latest innovations and increasing incorporation of advanced display technologies that not only eliminate the need of backlight but also appears much brighter than conventional displays. ‘Greater efficiency’ is a major advantage of GaN micro-LED - enabling reduced power consumption and making it a viable technology for battery-powered products.

Newer consumer trends are deemed to shape the future of GaN micro-LED market. For instance, a widespread adoption of wearable display or near-eye display (NED) devices for virtual reality experience and emerging trends of ‘auto-infotainment’ bringing a rapid evolution in conventional automotive display units will signify ample sales opportunities to be exploited.

Tracking the Growth Prospects in Developed and Developing Countries

GaN micro-LED technology is becoming a relatively fast contender to watch for display applications in number of industry verticals. Although the global commercialization of GaN micro-LED is still at the nascent phase, it has emerged as an attractive alternative to LCDs and OLEDs for both ultra-small and ultra-large applications. The U.S and EU5 are likely to offer greater opportunities due to strong presence of GaN micro-LED market players.

Stakeholders in these regions are also synchronizing their advances through strengthening collaborations with various technology solution providers. In addition, a growing number of Asian players have been demonstrating their progress and latest breakthroughs in the GaN micro-LED technology.

From Niche to Mainstream - Decoding the Journey

Recent studies have suggested that GaN micro-LED will soon become a mainstream; as steep declines in manufacturing costs and subsequent drop in pricing will allow the technology to gradually find acceptance in numerous applications, and further make it suitable of mass market. The key challenge existing today for GaN micro-LED manufacturers is the placement of gallium nitride material onto a substrate.

High complexity in design and an increase in the demand for foldable and flexible display technologies for advanced specifications could possibly represent a threat to the development of GaN micro-LED market.

With increased penetration of video-streaming services, today’s consumers are rapidly becoming accustomed to consuming information and entertainment on multiple screens at home. Such trends are making inroads into automotive display units in line with growing importance of in-car ambience and near-ubiquity of electric cars, and the result is likely to lead to increased demand for GaN micro LED.

Stakeholders are constantly placing their focus on the development of game-changing fabrication technology and tap into massive opportunities to replace incumbent technologies in a wide range of applications.

An exponential growth in wearable technology - from fitness trackers and smartwatches to Google Glass and Microsoft’s HoloLens - is highly likely to accelerate the mass market of GaN micro-LEDs. Wearable technologies are further changing the face of entertainment, enabling consumers get digitally-enhanced view of the remote environment, thereby potentially raising the need for cutting-edge display technology.

GaN micro-LED is slowly making its way to being a solid player in the display market space. Additionally, a drive of innovations in lighting industry and the emergence of smart lighting concept that not only lower the energy demands but also help shape urban spaces and smart cities are expected to prepare greater grounds for GaN micro-LED market.