Dynamic changes in the packaging industry and the increasing number of bottled consumer products are expected to drive the PET blow moulder market in the U.S.

The U.S. accounted for a revenue share of a little more than 70% in the North America PET blow moulder market in 2016 and is expected to gain 110 basis points by 2026. The U.S. is likely to witness a rapid Y-o-Y growth rate of close to 4% over the period of assessment. The PET blow moulder market in the U.S. is estimated to be valued at more than US$ 25 Mn in 2017 and is likely to record a CAGR of 4.5% from 2016 to 2026 to reach a little more than US$ 40 Mn by 2026. In terms of value, the U.S market is expected to represent an incremental opportunity of more than US$ 15 Mn and grow 1.6X during the forecast period. 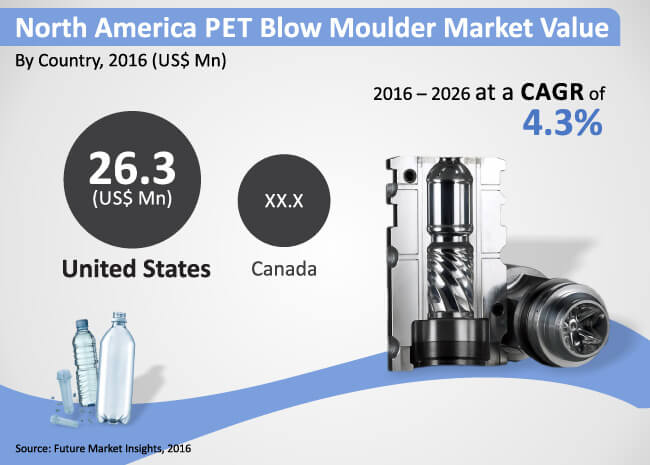 Increasing taxation and stringent government policies for the ban of plastic bags is expected to hinder the growth of the PET blow moulder market in the U.S.

PET moulding machines are made to manufacture a large number of bottles, i.e. a minimum of 30,000 bottles/hour. Because of the inherent quality, these machines are largely used by manufacturers who generally require large-scale output. However, if these machines are forced to be used for a smaller volume output then manufacturers would not be able to fetch the profit they expect.  The small scale industries operating in rural regions can’t consume such high volumes of the product thus forcing the market to produce machines that can handle smaller volumes in a single run with economic rates. Such economic machines with smaller volume are limited in the market, which is hampering the growth of the PET blow moulder market in the U.S.

Unstable macro-economic and political conditions are the major challenges faced by the PET blow moulder market in the U.S.

In a new report titled “PET Blow Moulder Market: North America Industry Analysis & Opportunity Assessment, 2016-2026,” Future Market Insights analysts have observed that the North America PET blow moulder market has been witnessing a high growth of injection blow moulding machines since the last few years. Features such as faster moulding rate with less scrap and less labour requirement are likely to drive the market for injection blow moulding machines during the forecast period. In end use type segments, the food & beverages segment is witnessing significant growth. Growing demand for convenient food packaging and an increase in the consumption of beverages is anticipated to drive demand in the food & beverages end-use segment.

The dashboard provides a detailed comparison of PET blow moulder manufacturers based on parameters such as operating margin, unique selling proposition, collective market share, and geographic concentration. The study encompasses market attractiveness analysis by machine type, technology, end use, and region. The report includes consumption of PET blow moulders and the revenue generated from the sales of PET Blow moulding machines in North America and important countries in this region. The report provides detailed competitive and company profiles of key participants operating in the North America PET blow moulder market.

This report provides forecast and analysis of the PET blow moulder market in North America. It provides historical data of 2015 along with forecast from 2016 to 2026 in terms of revenue (US$ Mn) and volume (Units). Market numbers have been estimated based on average consumption and weighted average pricing of PET blow moulding machines by machine type and the revenue is derived through country pricing trends. The North America PET blow moulder market has been analysed based on expected demand. Prices considered for the calculation of revenue are average country prices obtained through primary quotes from numerous regional PET blow moulder manufacturers. All key end users have been considered and potential applications have been estimated on the basis of secondary sources and feedback from primary respondents.

Country-wise demand patterns have been considered while estimating the market for various end users of PET blow moulding machines in the North America region. Market numbers for the North America PET blow moulder market by machine type, technology, and end use segments have been derived using the bottom-up approach, which is cumulative of each country’s demand. The company-level market share has been derived on the basis of revenues reported by key manufacturers. The market has been forecast based on constant currency rates. We have referred to a number of primary and secondary sources during the course of this study. Secondary sources include Factiva, World Bank, Packaging Digest, and Hoover’s; as well as company annual reports and publications.