Meat has been a main source of protein for years. However, in recent times, plant-based proteins are making waves in the booming food & beverage industry, due in part to rising health and environmental concerns. Although convincing the meat-free ‘meat’ was a distant dream among consumers – lacking variety and quality – today, the realistic alternatives to environmentally damaging meat are becoming a big business. Moreover, the ‘fake meat’ revolution is unfolding in the global food industry, and pea protein is leaping in popularity among manufacturers of meat, dairy food and seafood substitutes.

As pea has made headway as a highly potential source in the alternative proteins market, incumbent companies as well as new entrants are preparing to ramp up supply and solidify their place in the market. Considering growing consumers’ interest in plant-based protein options, food manufacturers are focusing on capturing the new opportunities. The result is expected to lead to increased demand for pea protein.

In response to the rise of vegan culture and strong desire of products such as plant-based protein beverages and protein snacks, industry leaders are rolling out a wide range of products using pea protein. Several food guides have further highlighted the nutritional benefits of plant-based proteins such as pea, soy, and wheat; of which peas do not carry certain concerns including allergies or gluten-intolerance associated with soy and wheat protein. 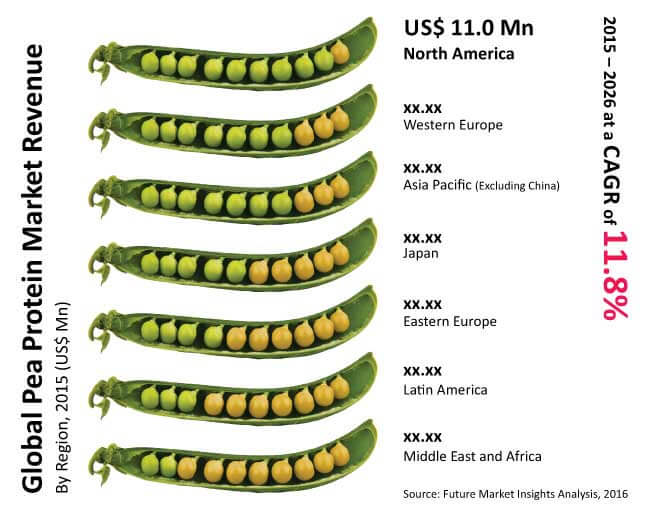 Pea protein isolate continues to account for relatively high sales, owing to its over 90% protein content which is isolated from other components of pea. Amid the rise of ‘free-from’ trend, texturized vegetable protein has been garnering traction, as it comes without fat and has no cholesterol, thereby influencing the demand for texturized pea protein.

Apart from vegan culture, consumers’ predilection for natural ingredients, clean label products, and organic variants of food has brought a radical upheaval in the F&B industry. In an attempt to maintain supremacy in the future of food, several companies are creating their own supply chain, working closely with farmers, and focusing on developing its proprietary process of cleaning peas and extracting the protein.

Although popular food outlets had been relatively slow to react to meatless trends, they are focusing on introducing plant-based options to their traditional menu items. Strong focus is also being placed on organic pea protein and ‘meaningful’ plant protein blends to stay ahead in the market.

However, greater marketing campaigns and awareness among consumers in low- and mid-economies along with compliance with stringent food regulations will require for the pea protein market players to reach new heights in the foreseeable future.

FAQ ABOUT THE REPORT

Which region will emerge dominant in the global pea protein market?

North America held dominance in the global pea protein market in 2019. It is expected to continue leading the market through the course of the forecast period.

Which application segment is expected to show the highest rate of growth?

Dietary supplements will continue to be the largest segment in the pea protein market between 2019 and 2026. It is also expected to register the fastest rate of growth in the market.

Which protein type segment among ingredients will witness the highest demand?

Among pea protein types, concentrates are likely to witness the highest demand, also representing the highest share in the market.

What is the chief factor driving the egg replacement ingredient market?

Pea protein is likely to gain popularity as a healthy alternative to plant-based and dairy proteins. The increasing health consciousness among consumers will boost the pea protein market.

Who among key players are leading the market?