Pedelces are projected to be the most prominent product type segment in the electric bike market growing at a significant CAGR of 3.2% during the forecast period. The demand for electric scooters and motorcycles market is growing at a relatively slow pace as compared to pedelecs. 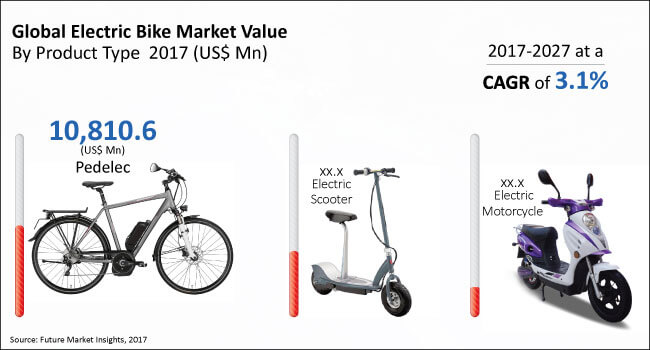 However, the weight of these batteries is high, they have a low charging life and they violate certain emission norms, owing to which they are likely to be replaced by the Li-ion and the NiMH segment in the coming years. The Li-Ion battery type segment is estimated to grow at a significant CAGR of 3% in terms of value in the electric bike market during the forecast period.

Though plug-in electric bikes can be charged at home, they are likely to require charging station in case of emergency situations for refilling the battery just like conventional vehicles require gas stations or filling stations. Therefore, in terms of value, the battery electric bike segment held more than 80% of the market share in 2017.

Two wheelers are the most prominent mode of transportation in the Asia Pacific (excluding Japan) region, which makes APEJ a key region for the production and sales of two wheelers. The key countries for two-wheeler sales in the APEJ region are China, India, and ASEAN countries. The popularity of two wheelers makes APEJ the most prominent market for electric bikes. The electric bikes market is estimated to grow at a significant CAGR of 3.2% and represent a total incremental opportunity of US$ 6.1 Bn in terms of value during the forecast period.

For instance, in 2017, Eccity Motocycles announced a strategic partnership DAFY networks. The 170 DAFY service centres located throughout France will be used for the delivery, commissioning and maintenance of the ECCITY electric bike. In 2017, Hero Electric announced that it is ready to launch the Flash two wheeler in India. The company launched its newest e-Bike Flash at the Green Mobility Expo 2017, New Delhi (India).

The report also provides answers to other important questions related to the electric bike market, which include:

On the basis of product type, the electric bike market can be segmented into:

On the basis of battery type, the electric bike market can be segmented into:

On the basis of technology, the electric bike market can be segmented into:

On the basis of region, the electric bike market can be segmented into: