Industrial air compressors are capable of producing pressure to power large-scale, complex systems. They are widely used to run major industrial and manufacturing equipment, including those that incorporate hydraulic or pneumatic operating components. Air compressors have gained considerable amount of popularity since their first Introduction and the trend is expected to continue. With rapid industrialization and increase in investment in mechanical equipment, the demand for industrial air compressors market is expected to witness steady growth between 2021 and 2031.

How Does Historical and Future Outlook for Industrial Air Compressor Market Match Up?

Industrial air compressors are one of the key components for air separation units, since they provide compression as well as being used for cooling applications at various stages. Air compressors are also efficient, sustainable and economical solutions for power generation. The food & beverage industry has made massive use of air compressors in the past few decades, which is continuously driving the demand for air compressors.

The air compressors market has experienced significant growth in the past few years due to expansion of various end-use sectors. Rapidly growing industries and increasing investments for mechanical equipment in developing and developed countries like the U.S., China, India, Germany, and others are driving the market for air compressors. Also, new investments in the oil & gas sector in Europe and North America is likely to boost the demand for air compressors. Future Market Insights expects the global industrial air compressor market to expand at over 4.6% CAGR through 2031.

What is the Commercial Potential of Industrial Air Compressors?

The demand for industrial air compressors is projected to surge during the forecast period due to their usage in various industrial applications. Industrialization is gaining momentum in developing nations such as China, India, Russia, and others. The demand for air compressors is majorly rising from the oil & gas sector due to their extensive application in oil & gas transportation pipelines. Substantial increase in investments for brownfield and greenfield projects, coupled with planned cross-country pipeline projects, is expected to create positive prospects for growth in demand over the coming years.

Competitive price offering and rise in end user satisfaction by providing innovative and customized products according to the end user requirements are the result of enhanced R&D activities. Moreover, establishing sales and service facilities in emerging countries, coupled with long-term partnerships with regional distributors, is also paving the way for the expansion of the reach of market players.

How large is the Opportunity in the U.S.?

Future Market Insights has projected the U.S. to remain one of the most lucrative markets throughout the course of the forecast period. The overall valuation of the U.S. market is expected to surpass US$ 4.44 Bn in 2021.

Key factor supporting market expansion is the country’s high production and consumption of oil. The oil production output increased by 11% from 2018 to 2019. Industrial air compressors are a key component in oil production plants and transportation, therefore, rising oil production is expected to bode well for the market.

Furthermore, growth in the food & beverage industry, pharmaceutical and chemical industries also created opportunities for the expansion of the market in the U.S.

What is the outlook in Germany for Industrial Air Compressors?

Germany holds a leading share in the Europe market for industrial air compressors. It holds around 1/6 of the European market owing to excessive demand from the growing automotive industry in the country. Moreover, upcoming gas transportation pipeline projects in Germany are providing the impetus for the industrial air compressor market’s growth. Furthermore, rapidly growing mining and pharmaceutical industries in the country fuel the demand.

What is the market Scenario in India for Industrial Air Compressors?

How are GCC Countries Faring in the Market?

Which Technology type of Industrial Air Compressors Witnesses Most Demand?

The rotary type industrial air compressors accounts for nearly 30% sales in the market. Demand for rotary compressors will remain high due to their increasing application in various end-use sectors. Technological advancements by manufacturers to provide satisfactory solutions to end users are enhancing the application of rotary compressors. They also have a long lifespan and low maintenance costs comparatively, which makes them more preferable for end users.

Which Driver type of Industrial Air Compressor is Most Popular?

Which is the Preferred Compression Stage?

The capacity segment of 0 HP to 500 HP will exhibit increasing sales due to rising application of this type of air compressors in various end-use sectors. This capacity range holds more than half of the market share in industrial air compressors. Air compressors of this capacity are cost-effective and consume less space, which make them suitable for various end uses.

Who is the Leading End User of Industrial Air Compressors?

Industrial air compressor manufacturers will experience rising demand from various industries. Oil & gas sector will exhibit considerably high demand for industrial air compressors. Investment aimed at expansion of the oil industry will therefore support the growth of the market. The demand in the oil and gas industry is expected to rise at 4.9% CAGR between 2021 and 2031. 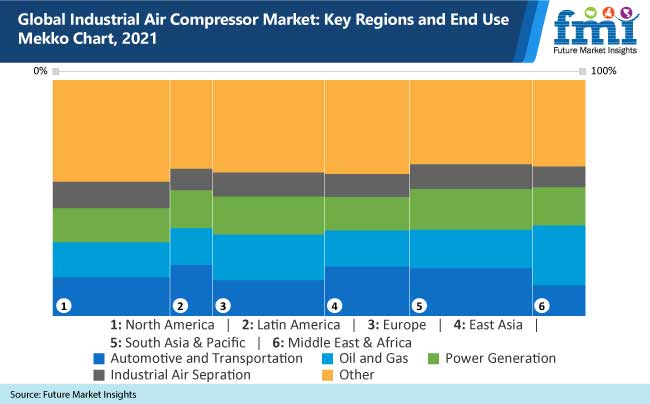 Global industrial air compressor market is dominated by large players globally, who occupy a more than three-fourths of the market. The global market for industrial air compressors comprises some large-scale and mid-scale manufacturers focusing on product innovation and high-end technology development. Key industry participants are investing in strategic alliances and partnerships to gain a competitive advantage in the evolving global market.

These partnerships allow companies to strengthen their technical expertise with improved production capacity. Many key manufacturers are acquiring local distributors and manufacturers to enhance their product reach globally as well as to strengthen their distribution. To enhance the company’s product sales, companies are collaborating and creating partnerships with end users in demanding sectors.