The magnetron technology finds widespread application in various end-use industries for wide range of plasma generation, drying, and heating processes. Although, demand for magnetron in the industrial sector has remained steady, efforts for minimizing operational costs have influenced manufacturers in introducing advanced equipment. The overall outlook for the global industrial magnetron seems positive, with a steady stream of opportunities likely to emerge for stakeholders to capitalize on.

In industrial settings, processing continuous flow of materials creates demand for continuous-wave magnetrons. The EM-shielded chamber is basically cooled using water or air, in order to prevent overheating of the equipment. Although both water- and air-cooled magnetrons are widely employed in industrial settings, demand for air-cooled magnetrons are expected to remain relatively higher on the back of their cost effectiveness.

Although adoption of solid-state power oscillators in currently low, their purported benefits such as requirement for relatively lower power supply bias voltages and longer lifespan are making them an enabling technology for industrial settings when it comes to heating and drying applications.

Demand for solid-state power oscillators is anticipated to witness a surge in the near future, thereby restraining adoption of industrial magnetrons to a certain extent. 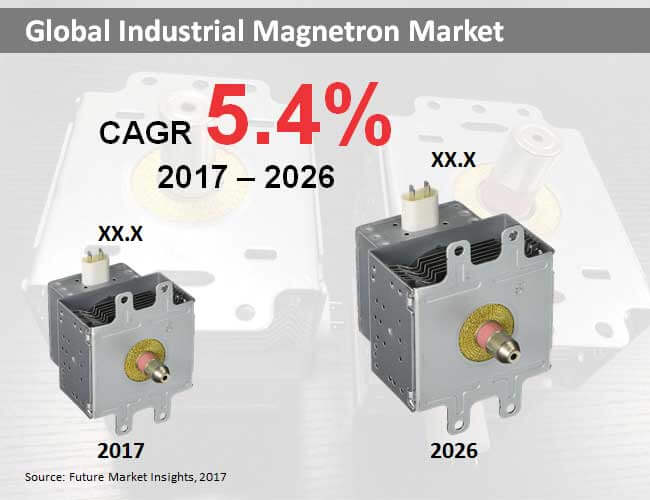 Asia-Pacific excluding Japan (APEJ) is slated to remain the fast-expanding market for industrial magnetron. Developments in China and India are expected to be the keystone for the overall market growth in the region. Although concerns regarding deleveraging exist in China, the broader outlook on the country’s industrial growth is likely to remain positive.

India will also embark on drastic reforms, aiming to boost investments in the country’s industrial sectors. These macroeconomic factors will together influence demand for industrial magnetrons in APEJ.

North America will remain the most remunerative market for industrial magnetron. Revenues from industrial magnetron sales in this region will account for nearly two-fifth market share by 2026-end. American industries account for the bulk of demand for magnetrons, with Canada accounting for a minority share. The macroeconomic outlook on the US remains positive, with a period of Goldilocks in the offing.