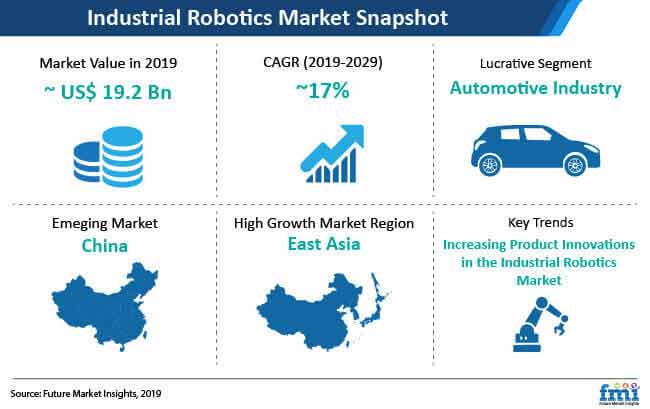 The cost of labor is rising at a significant rate even in traditional LCC (Low Cost Carrier) countries such as, India and China. Owing to the increasing labor cost around the world, the payback for industrial robots and industry automation is gaining more traction in the Industrial Robotics Market.

Furthermore, countries such as Germany, South Korea, Japan, etc., are also among the top 5 in the industrial robotics market owing to the significantly high labor costs for skilled personnel in the industry. The consistently increasing labor costs and decreasing prices of industrial robots are expected to drive the market over the forecast period.

In an intense competitive environment, manufacturers are focusing on distinguished product offerings to stand out from other manufacturers. Manufacturers are continuously investing in research and development activities to develop robots for new application areas in several industries. They are also focusing on continuously developing new products for gaining a competitive advantage in the Industrial Robotics Market.

By doing so, manufacturers are offering industrial robots at the lowest possible price to increase their sales in the market. Moreover, due to the decrease in prices, tier 2 and tier 3 industry manufactures are also inclined towards the automation and installation of industrial robotics in their industries.

Long-term Partnerships and Collaboration with OEMs

As the industrial robotics market is growing at a significant rate, the competiveness in the market is also increasing. Manufacturers are focusing on the customer retention and acquiring contracts for automation of industries.

To win an edge over other players in the market, industrial robot manufacturers are entering into long-term supply contracts with OEMs to ensure uninterrupted supply for long durations. Manufacturers are also offering integrated product and service packages such as systems, installation, services, maintenance, and training, to stand out from other players in the market. 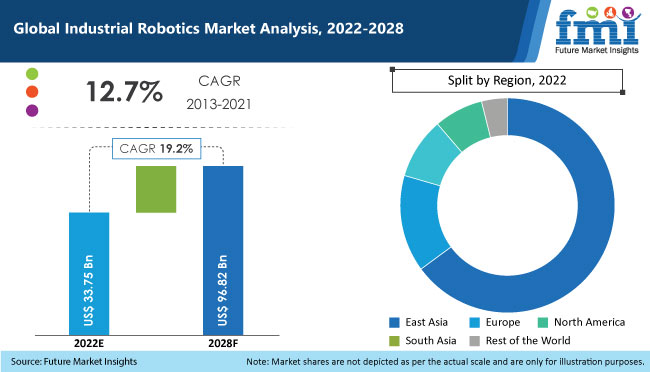 Towards the ‘Maturing’ Future of Manufacturing

Automakers are implementing laser cutting operation and laser welding application at the plants with the assistance of industrial robots, on grounds of better positioning accuracy and higher speed. Robotic lasers adjust the beam focal length and working angle, resulting in faster laser welding at two laser stitches per second. Further, with the integration of sensor technology into industrial robots, industrial workers can detect moisture, or gas leakages in electric drive systems.

However, the number of skilled workforce is not able to equate the rising adoption of industrial robotics in automation bracket. Industry owners leveraging industrial robotics are observing concerns regarding personnel safety. Some robots, including fenced robots, can be dangerous if handled improperly due to human error, control error, unauthorized access, and mechanical failure.

Presence of skilled and educated labor can mitigate these mishaps. Furthermore, the integrators are performing risk evaluation sessions during the initial stage of design and distributing as a document throughout the product life.

Why are Participants Tapping the East Asian Countries?

With an upsurge in unmanned operations, East Asia remains to be the mecca of the industrial robotics market over the foreseeable timeframe, with South Asia showing tremendous growth. Under ‘Made in China 2025’ strategy, the local manufacturers are instructed to increase the yield of industrial robots from about 150, 000 in 2020 to 400, 000 by 2030.

The cost of labor is escalating significantly in traditional LCC (Low Cost Carrier) countries such as, India, and China. In addition, the vehicle production in India and China is progressing at a healthy rate of 5.9% and 3.4% respectively, which is further complementing the growth of industrial robotics market.

The global industrial robotics market is witnessing cut-throat competition with leading manufacturers, including Kuka AG, ABB Ltd., among others, accounting for about half of the total market revenue.

Robot makers are manufacturing end-of-arm-tools (EOAT) and end effectors, such as grippers, for handling large or delicate components. Key market participants are leveraging AI bin-picking technology for faster identification of suitable objects to be picked from a bin. Manufacturers are coming up with pepped-up robots for painting large work parts, such as automobile bodies, bumpers, or other construction equipment. In addition, major market contributors are designing hardware modules to access industrial robots via a machine controller.

Mature and emerging businesses are signing up for robots-as-a-service (RaaS) by leasing robotic devices and subscribing cloud-based services, thereby, initial investment and maintenance expenses. Further, manufacturers are turning to OLP (Offline Programming) for quicker deployment at a lower initial cost.

Market players are entering into mutually beneficial partnerships with their rivals for advanced automation and robotics incorporating human-robot interface for collaborative robots. Furthermore, market leaders and followers are cutting capital costs to penetrate into low and middle-income countries (LMIC), including India, and Vietnam, and witnessing the arrival of new markets.

Digital technologies, including to Internet of Things (IoT), among others, as well as increasing production of regulatory-approved automobiles in countries across the globe are set to be the gold mines of growth for industrial robotics market worldwide. The prominence of the Fourth Industrial Revolution or Industry 4.0 is enhancing the human-machine interaction with cutting-edge technologies for instance, artificial intelligence, blockchain, and industrial internet of things (IIoT), to drive predictive maintenance, inventory planning, and autonomous decision-making.

Industrial robots are becoming commonplace in automobile bracket, with developed regions, such as Japan, and Europe, exhibiting vehicle production at a rate of about 5%. By next year, more than 3 million industrial robots are estimated to be employed globally, exceeding twice of that being used a couple of years ago. Furthermore, innovators have designed industrial robots that mimic the movements of dogs, cats, and humans with great accuracy.