Microalgae are gradually finding application in pet food to increase palatability and while meeting the requirements of natural ingredients in pet food formulations. Microalgae also have a higher shelf life and are available in powder and liquid forms, which makes it easy to incorporate in different products.

Microalgae contain Vitamin A, C and E and Beta-carotene in large quantities, making it popular in pet food products. Microalgae are beneficial in bolstering appetite and immunity. Microalgae are also known for providing a natural defense system to pets and protecting them against harmful microorganisms. Microalgae also reduced the mortality rates of the pets. 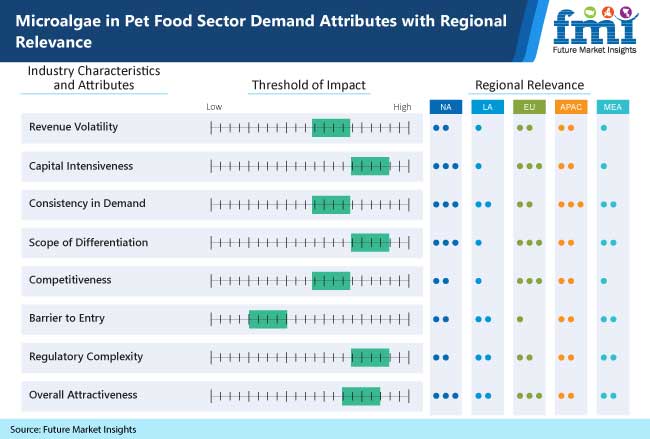 Is the Launch of Plant-Based (Vegan) Diets for Pets Pushing Growth?

Human diets containing little or no animal meat have grown in popularity over the last decade. As a result, an increasing number of pet owners are focusing on similar dietary requirements for their pets.

Recently, plant-based and vegetarian diets have been introduced to the pet food market. Microalgae contain various essential nutrients, and provide key health benefits that are required for carnivore and omnivore pets.

How is the Rising Number of Older Animals Influencing Microalgae Use in Pet Food?

Pets are living longer lives than before, thanks to improved healthcare standards. Arthritis, cancer, cardiovascular disease, cataracts, and even hair thinning are all common in older animals. Supplementation is frequently chosen by pet owners to help maintain health and alleviate age-related aches and pains in their elderly companions.

The growing number of senior pets contributes to an increase in the sale of pet supplements. High-quality whole-cell marine algae can be a viable substitute for raw omega-3 resources derived from ocean fish. Microalgae is a plentiful, highly sustainable source of the most sought-after omega-3 fatty acids that are not restricted by a natural resource.

The price of this type of algae is also consistent because it is produced through fermentation, where demand has a much smaller impact on production costs. Consequently, the growing number of senior animals bolsters sales prospects of microalgae-based pet food products.

What is the Impact of COVID-19 on the Demand for Microalgae in the Pet Food Sector?

The COVID-19 outbreak has acted as a significant restraint on the global demand for microalgae in pet food sector in 2021, as supply chains have been interrupted due to trade limitations, and consumption has decreased due to global lockdowns.

The repetitive lockdowns have had a significant impact on many pet food manufacturers, with disruptions to transportation of goods, both finished and raw, with limited availability of pet food items on conventional retail channels.

How large is the Opportunity for Microalgae in the Pet Food Sector of the U.S.?

According to FMI, North America is a dominant region in the global microalgae market and it is also expected to witness a lucrative growth rate over the forecast period. According to the latest study, the U.S. is estimated to account for more than 90.0% of the North American market in 2021.

According to FMI’s analysis, the pet adoption rate in 2020 grew as the number of pets entering shelters in the U.S. rose by more than 20% in 2020 as compared to 2019. The increased pet adoption in the country as a result of the covid-19 pandemic is creating more opportunities for manufacturers operating in the global microalgae market.

How is Demand for Microalgae Faring in the Pet Food Sector of Germany?

Germany is a prominent country in the European Union, according to the USDA. With more than 40% of German people having a pet and nearly 20% of households having more than one pet, growth prospects remain positive.

According to the FMI analysis, Germany is also a leading market for pet food products, with nearly 34 million pets and 83.0 million of the wealthiest consumers. The humanization of pets is a major trend in German microalgae market.

Will the Demand for Microalgae in Brazil’s Pet Food Sector Surge in the Coming Years?

Brazil is one of the prominent emerging economies of the world. By 2031, the country is expected to account for more than 45% of demand for microalgae in pet food sector within Latin America.

There is a growing interest in natural and functional pet food in Brazil. As a result of this emphasis on specific ingredients such as microalgae and special diets, the average unit price has risen, particularly in the super-premium and premium segments. The increased demand for premium pet food ingredients in Brazil drives the growth of microalgae in the pet food sector.

How is China Responding to Demand for Microalgae in the Pet Food Sector?

According to FMI’s analysis, China is estimated to account for more than 52% of the Asia Pacific Market in the year 2021. In 2018, China ranked third in terms of dog ownership, with over 27 million dogs as pets.

Cats and birds were the next most popular types of pets, accounting for a sizable portion of revenue. Pet humanization, the growing trend of e-commerce, and the growing market for natural pet foods are some of the major factors driving the country's demand for microalgae in pet food sector.

Why is the Demand for Microalgae in Pet Food Rising in Australia?

Australia is another prominent country in Asia Pacific market. In the Asia Pacific, Oceania accounted for 7.5% of market share in 2021. Pets have traditionally played an important role in Australia, and evolving time-constrained livelihoods are playing a major role in establishing the shift toward commercial and retail products.

The significance of the Australian market can be comprehended through emerging lifestyle choices and western food and nutrition trends. The shift towards commercial and retail products bolsters the growth of the microalgae market in Australia.

Which Species of Microalgae Accounted for Maximum Share in the Global Market?

Spirulina microalgae are regarded as an important source of micro- and macronutrients including iron, high quality protein, carotenoids, vitamins and gamma-linolenic fatty acids. Intake of microalgae spirulina helps pet to produce immunoglobulin A.

Nutritional properties of spirulina microalgae driving the growth of global market in pet food sector. Spirulina is estimated to account for more than 64% of market share in 2021.

Fresh water microalgae are estimated to account for more than 84% of market share in 2021, which is expected to witness growth rate of CAGR 4.8% over the forecast period to reach a value of US$ 2.2 Million in 2031.

Which is Key Application of Microalgae in Pet Food Sector?

Dog feed applications of microalgae accounted for a maximum share of nearly 46% in 2021, which is also expected to witness lucrative growth rate of CAGR 6.0% over the forecast period.

The manufacturers operating in the dog feed market drive the demand for microalgae-based food products owing to their nutrition properties.

Manufacturers in the global microalgae market are focusing on developing innovative products to meet emerging demand from both emerging and established markets. After the FDA approved the use of Spirulina in food and beverage products, the demand for spirulina has increased.

Demand for Microalgae in Pet Food Sector by Category

By End Use Application: