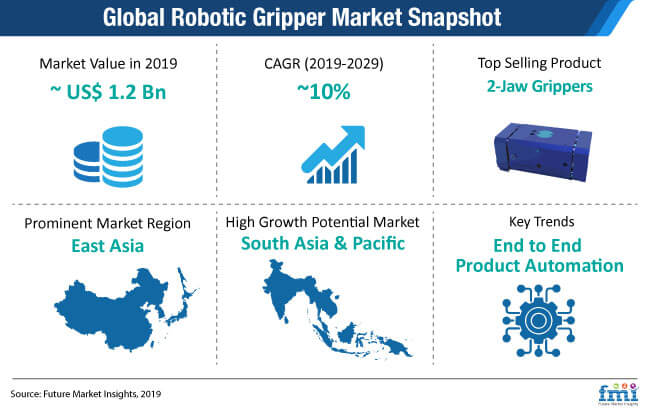 Robotic gripper manufacturers are focusing on development of grippers by integration of IoT (Internet of Things). Also, application-specific advances are being incorporated. For instance, the development of soft grippers for food production and processing industry, wherein, delicate yet flexible handling of a variety of food products, can be carried out with the same gripper.

The industrial robotics industry is witnessing ongoing rapid automation across industrial operations. The penetration of automation is further supported by decreasing costs of robotic technology over the past few decades. Robotics play a vital role in emerging markets as an important factor for business profitability.

Among strong competition in the market, where overall operational efficiency and production output plays a crucial role, automation is helping businesses to maintain the competitive position in the market. As essential robotic constituent, robotic grippers have experienced significant developments in design, owing to which businesses are able to achieve increased efficiency and productivity, thereby helping in rising the overall business ROI.

The advent of robotics has transformed the automotive industry landscape significantly by enabling automakers to accommodate the behemoth demand for automobiles. In particular, robotic process automation (RPA) has significantly aided in improving the back office operations. Robotic end of arm tools have improved the mass production of automobiles that requires management of repetitive operations without errors. 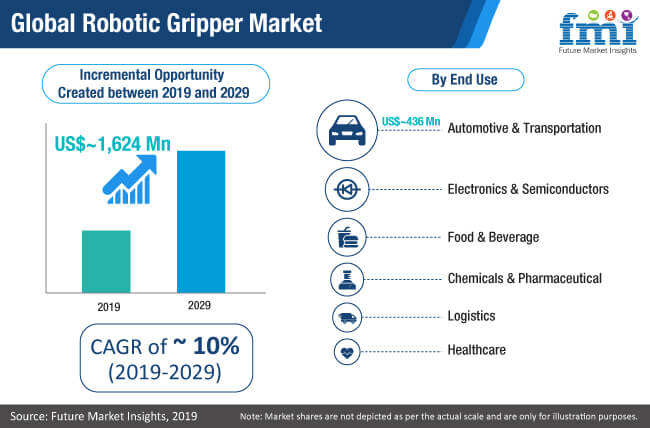 Since the initial concept of gripper were introduced in 1969 at Stanford University, it has taken giant strides in terms of evolution and become a critical component of industrial robots used today. At present, the automation trend has engulfed a wide range of industrial domains worldwide, as manufacturers are keen on enhancing efficiency, production, and reducing overall costs simultaneously.

Thus, smart technologies including Artificial Intelligence (AI) and Internet of Things (IoT) are gradually entering the fray and playing an imperative role in transforming the modern-day industrial ecosystem. Hence, owing to rapid progress in AI and gripping technologies, the demand for adaptive robotic grippers has surged at a commendable pace in recent years.

Manufacturers operating in the robotic gripper landscape have significantly increased their focus on developing innovative and cutting-edge grippers to fulfil the growing demand, especially from the automotive and the electronic & semiconductor industry. In addition, the onset of Industry 4.0 is expected to create lucrative opportunities for robot gripper manufactures in the coming years.

In the course of the last decade, several key industrial sectors including the automotive, electronics, and food & beverage among others have increased their focus on industrial robotics and automation in their efforts to enhance productivity, streamline operations, and maximize their output. Thus, the demand for industrial robots, warehouse robotics and robotic component including grippers witnessed a significant growth in recent years.

In addition, the advent of ‘smart technologies’ including, artificial intelligence, IoT, and others in conjunction with progress in mobility and gripping technologies has paved the path for smart adaptive robotic grippers in the last few years.

Further, the integration of smart IoT enabled sensors in robotic components has played a crucial role in the assessment and maintenance of robotic grippers. Moreover, smart technologies have enabled manufacturers to design and develop innovative and customized grippers for different applications.

Owing to the rapid progress in technology, robotic grippers have also evolved and become more adapt to the changing industrial requirements. At present, there is high emphasis on designing flexible and smart grippers by deploying various sensors primarily aimed to enhance the functionalities of the gripper. Robotic grippers are used to perform a range of applications in an industrial environment including, material handling, warehouse management, packaging, logistics, and more.

Although two-finger grippers were largely used to carry out less complex tasks, multiple gripping technologies are expected to takeover in the next coming years. More recently, robot grippers with flexible fingers have garnered high popularity from different industries, as they are highly efficient in grasping objects of varying shapes and sizes.

In the last decade, East Asia has remained at the forefront as far as the advancement in factory automation is concerned. Several nations in East Asia, including, China, Japan, and South Korea have consistently demonstrated their capabilities of developing next-generation robotic grippers with advanced features.

Strong Focus on Product Innovation to Optimize Functionality and Flexibility

Manufacturers operating in the robotic gripper market have identified the need for product innovation to establish a firm foothold in the market. To that end, stakeholders are regularly investing resources to develop cost-effective and efficient grippers that are versatile with their functionalities. In addition, more recently, there was a significant demand for manual dexterity in robotic grippers to perform a range of e-commerce applications.

Further, robotic grippers have emerged as one of the most important components of an industrial robot. The ability to pick and place objects of different shapes and sizes with high degree of efficiency will play an important role in the emerging fourth revolution of industries.

Leading players operating in the robotic grippers market including SCHUNK GmBh & Co. KG, Soft Robotics, Inc., Applied Robotics, and ABB Limited among others have identified the dire need to introduce advanced and highly innovative robotic grippers that are suitable to perform tasks in the factories of the future.

As the quest towards factory automation and building ‘smart factories’ has shifted gears in recent years, the demand for robotic grippers is expected to grow at a strong pace in the foreseeable future. In addition, manufacturers are expected to make use of different types of grippers to ensure a more reliable pick-and-place operation in the smart manufacturing space.