[250 pages report] Adoption of the industrial robots market continues to gain traction among big businesses, while SMEs are slow to take off. There has been a significant deceleration in new R&D initiatives, as COVID-19 induces a refocus on critical organizational activities.

The new edition (2021-2031) edition of the industrial robots market study tracks key developments that will influence sales, spending, the sentiment of stakeholders in this landscape. The report also offers a detailed analysis of the competitive landscape, with strategies of key manufacturers and suppliers discussed lucidly.

The use of industrial robots market is increasing around the globe as productivity and efficiency become key focus areas for manufacturers. As per the report by the International Federation of Robotics, the worldwide demand for modern robots per 10,000 industry employees has risen from 66 in 2015 to 85 in 2017.

The applied robotics industry is expecting to see dramatically increased costs and efficiency over the next decade with the amalgamation of AI knowledge as well as distinct developments in robotic technology.

One of the main issues is whether and how advanced mechanics can affect creation steps, specifically in areas such as manufacturing that are traded from around the world. In essence, the last tremendous wave of invention, managed by data innovation, was decentralizing in nature, allowing distant chains to expand to the edges of the globe looking for modest jobs.

Why Growth of Automotive Industry is Crucial for Industrial Robot Market Sales?

Automotive players are focusing on greater adaptability in the production processes as well as better protection for innovation reception staff. Nevertheless, the cost of advanced mechanical engineering is the critical variable for automotive players, considerably more so than for various fields.

The automotive industry has witnessed a decline due to the COVID-19 pandemic. Recovery has commenced in some parts of the world, especially in Asia Pacific, however, for industrial robots Market demand to gain traction, recovery in automotive industry is paramount.

The automotive industry has traditionally been a key demand generator for industrial robots Market. The industry is hoping for a quick revival of the sector so that momentum can be achieved.

How has Interoperability Emerged as a Challenge for Industrial Robot Market Manufacturers?

In any plant or assembly facility, interoperability is a key feature. To interface and coordinate multiple mechanization structures, there needs to be a measured layout for both machinery and programming.

The emphasis is on the product side, which is used for programming, diagnosing, and inspection. Using robot arms from multiple vendors is not exceptional for companies. Because of a continuing change, organizations can often have to rebuild robotics or comply with separate components such as vision frameworks and end effectors.

Rather than the manufacturer or end-client, it is the responsibility of the integrator to decide on the use and set up or programming of the robot. Due to its remarkable needs and lack of manpower to established a mind-boggling computerization arrangement, interoperability problems are a big test, specifically for SMEs.

The food processing industry has been a little slow in incorporating industrial robots as the industry mostly consists of small and medium enterprises. SMEs are reluctant to invest in robotics because of several factors such as the demand variation in the market, low labor cost, and an assumption that robots are not suitable for handling various types of food products that are delicate in nature.

However, the increase in Industrial Robots Market demand and need for larger output, lack of low-cost labor, and technological advancements in robotic has led the food manufacturers to re-consider their orthodox human-based manufacturing operations and switch to robotics. There are several applications in food processing units which are already using robots such as meat processing, fruit, and vegetable handling, and pick and place for processed food.

How Big is the Opportunity in China?

China continues to be a key market for industrial robot manufacturers globally. It manufactures over one third of the total robots manufactured globally. The shift towards robots and industrialization is growing at a brisk pace in China. Even though the pandemic has slowed the worldwide market for Industrial Robots, it has not been same for China. Tech giants in China have been working on the digitalization and modernization of production to combat any such pandemic in near future. 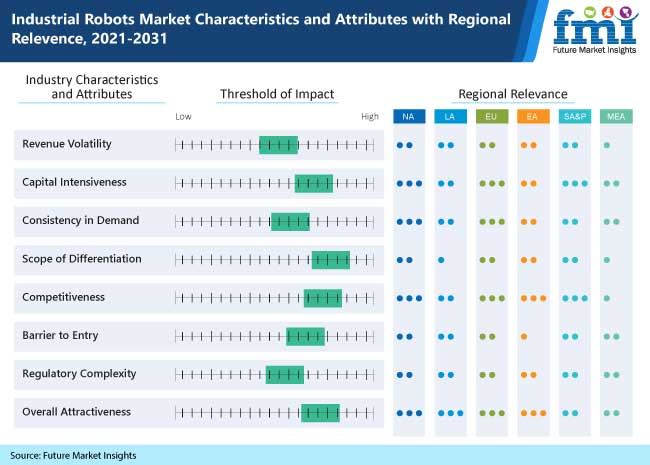 End-users in France Continue to Invest in Industrial Robots

Despite an increase in automation industry in France there were very few robots used in the country. An initiative which was dedicated to speed up the adoption of industrial robots in France was held which really affected the robotics market in France. After the exhibition which took place in May 2017 at the Docks of Paris improved the situation of robotics market. Although robotics always generates interest, it often comes with worries about the possible impact on employment.

This is a clear indication of the huge, accelerating increase in demand for industrial robots in France. Collaborative robots which is a type of industrial robots is being widely used in France as it is accessible-to-all, flexible, easily programmable and inexpensive automation technology.

What is the Outlook on Industrial Robot Market in US?

The US industrial robot market is expected to develop at a steady rate throughout the estimated period. Industrial robots have been highly used by Automotive industry in US among which car manufacturers and component suppliers will continue to lead the market. The process of retooling which is necessary for new car models will also be a driving factor to increase the demand for industrial robots.

As per Jeff Burnstein, President of Robotic Industries Association, the rapid rise of robots usage in US is because of several reasons such as the largest user of industrial robots which is the automotive industry has increased its purchases of robots as well as created more jobs in the manufacturing process.

There has been a rapid growth in the use of robots in general industries, such as warehousing, life sciences, electronic manufacturers, and the food processing industry. The use of industrial robots has been also rising in small and medium-sized companies who see robotics as a key factor in improving productivity and product quality in order to stay globally competitive. He is also expecting to see this trend growing in the near future.

The rubber and plastics industry, metals and machinery industry, the pharmaceutical and cosmetics industry, and the food and beverage industry in the US have also seen a steady growth in the use of robots. The changing demands of customers necessitate the expansion and modernization of capacities which increases the need for automation to increase its competitiveness which increases the demand for industrial robots market.

Which is the key Application for Industrial Robots Market?

Welding & Soldering , Assembly & Disassembly , material handling, Painting & Dispensing , and others (assessment and quality testing) are important applications for mechanical robots. Handling tasks such as finishing and burring (including redundant undertakings in various companies such as cars; synthetic substances, plastics, and elastic; and wood) are required to have the fastest development.

Which is the Leading End-User for Industrial Robots?

Electrical and electronics is the fastest-growing segment, with growth likely to increase during the assessment period. In addition, the automotive industry has been chasing behind to emerge as a largest end user for the Industrial Robots.

Since quality and precision are two of the essential components of an electronic manufacturing facility, the hardware industry has proactively welcomed the adoption of mechanical robots.

The biggest reasons which makes electrical and electronic the biggest market for Industrial Robots is the expanding range of tasks that can be performed by robots particularly in the assembly of electronic equipments and components. Robots are also used throughout the complete production cycle of a electronic equipment– from cutting metal housings to assembling miniature components on boards, applying sealants and adhesives buffing and polishing surfaces, performing quality inspections and packing and palletizing finished products.

The industrial robots market is highly competitive in nature. The major players of the robotics market follow techniques such as mergers and acquisitions to maintain their position in the market. These players are levaraging strategic collaborative techniques to increase their profit as well as their market share.

Some of the leading industrial robot manufacturers include,

Scope of the Report:

Yes, the research has been conducted a combination of primary by expert analysts of Future Market Insights through research and secondary research. To know more about how the research was conducted, you can speak to a research analyst

FMI follows a methodology that encompasses the demand-side assessment of the market and triangulates the same through supply-side analysis. This methodology is based on the use of standard market structure, methods, and definitions.

At what rate, Industrial robot market is expected to grow for the next 5 years?

It is expected that the global demand for Industrial Robots Market will rise by a steady CAGR over the next 5 years. Increased recognition of customers has a significant influence on product choice and Industrial robot sales.

What are the major applications of Industrial Robots?

What are the basic tactics integrated by industry players to create a niche in the demand for Industrial Robots Market?

Mergers, alliances, and product creation provide specific tactics that industry leaders have incorporated to create a niche in the Industrial Robots market.

Which is the potential market for industrial robots in terms of the region?

The APAC region is expected to be the fastest-growing market compared to other regions. This is primarily due to the presence of a large electrical and electronics industry in Asia, coupled with major regional industrial robotics players such as FANUC (Japan), YASKAWA (Japan), and Mitsubishi Electric (Japan). Developing countries in the APAC region also offer a potential growth opportunity for the market in the near future.

What are the drivers and opportunities for the industrial robotics market?

Increasing demand for collaborative robots coupled with the skilled labor shortage for tasks such as packaging and welding across industries is primarily driving the need for automation and the use of industrial robots. The electronics industry presents a significant growth opportunity for industrial robots, owing to the use of robots across the entire production cycle in processes including assembly, dispensing, milling, inspection, packaging, and palletizing applications.