API to continue dominance as chief ingredient in drug formulations

API is anticipated to dominate the global market with more than 30% market share and is expected to continue its dominance in the market through 2028. APIs are increasingly being used by various players for manufacturing effervescent tablets and as an intermediate for the manufacture of various pharmaceutical drugs. In the pharmaceutical sector, APIs are also used to enhance drug abilities.

Studies have also indicated that factors like increased demand for performing drugs in both established and emerging markets and the need for ‘secondary care’ small molecules – integral in prescription drugs issued by specialists such as oncologists, have fuelled the application of APIs in the global pharma grade sodium bicarbonate market. Application of pharma grade sodium bicarbonate in hemodialysis is projected to gain significant revenue share over the forecast period. 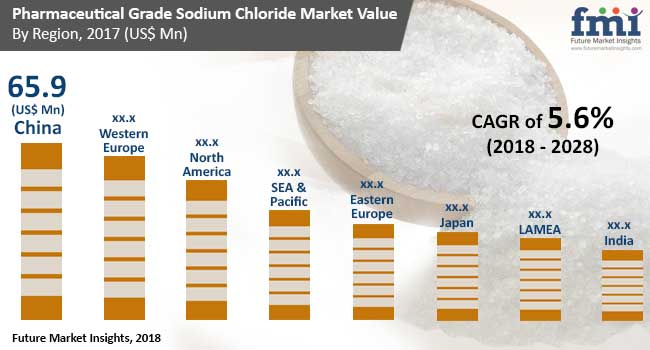 According to the market analysis, North America is anticipated to lead the global pharma grade sodium bicarbonate market and is expected to hold 26.4% share by the end of 2028, owing to the steady growth of the pharmaceuticals industry in the region coupled with the high adoption of APIs.

Additionally, the use of APIs and excipients will cumulatively dominate the North America regional market by the end of 2028 and eventually trigger product demand over the forecast period.

Owing to the growing number of patients suffering from renal diseases, there has been significant growth in the consumption of pharma grade sodium bicarbonate for hemodialysis solutions. ~10% of the population has been suffering from chronic kidney diseases according to a recent survey, of which ~2 Mn people are given dialysis treatment – this number is expected to double in the coming years.

Due to the shortage of kidney donors and other medical constraints like improper matching of donor and patient medicinal aspects, the rate of kidney transplantation is comparatively less as compared to dialysis. Most of the End Stage Renal Diseases (ESRD) patients are treated through dialysis.

Studies have shown that among dialysis types, around 90% of the patients prefer hemodialysis, where sodium bicarbonate finds application as an important active pharmaceutical ingredient.

To understand and assess opportunities in the global pharma grade sodium bicarbonate market, the report has been divided into the below sections: