By 2026, the LTE segment of the global CMOS power amplifier market is expected to register an incremental dollar opportunity worth US$ 900 Mn. 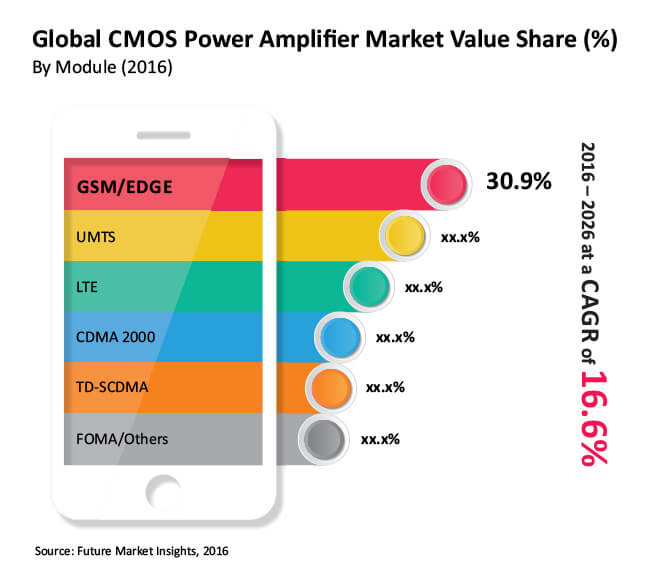 Adoption of LTE technology anticipated to fuel growth of the global CMOS power amplifier market in the near future With rapid development and adoption of 4G wireless communication, performance requirements have increased due to the rising need for increased bandwidth and quicker data speeds. CMOS power amplifier is recognised as a prominent solution to meet the need for low cost, low power and high capacity of 4G technology.

Moreover, several key players in the market are currently launching new CMOS power amplifiers that are compatible with LTE and advanced LTE technologies.

In October 2015, ACCO Semiconductor Inc. – a fabless semiconductors provider based in the U.S. – introduced CMOS Multi-mode, Multi-band Power Amplifier (MMPA) – designed to support quad-band GSM/EDGE and 12-band 3G/LTE smartphones and applications in the Internet of Things.

“Owing to recent advancements in CMOS technology, various beneficial features such as low power consumption, high yield, high integration of systems on chip (SoC) and efficient switched-mode amplifiers have been introduced. One of the major factors due to which CMOS is gaining rapid traction is its cost effectiveness as compared to other commonly used technologies for radio frequency (RF) front end circuits such as Gallium Arsenide (GaAs), BiCMOS and silicon bipolar.

What is the outlook of the global CMOS power amplifier market?

Which are some key players in the global CMOS power amplifier market?

Soc As A Service Market